A Brief History of the Rolex Air-King

A Brief History of the Rolex Air-King

Why the Rolex Air-King does not receive more attention is a bit of a mystery. The brand’s various sports watches continue to garner the majority of the public’s attention, and even many of the previously-ignored models have started to catch on with certain pockets of the collecting world in recent years. And yet, the Rolex Air-King continues to fly under the radar.

However, the Air-King name is one of the oldest in Rolex’s catalog, pre-dating all of the brand’s legendary sports models and first making an appearance way back in the 1940s. Strangely, Rolex doesn’t consider this to be the official start of the Air-King collection, and despite having one of the longest and most unusual histories of any Rolex model, the Air-King remains largely overlooked and often even ignored. 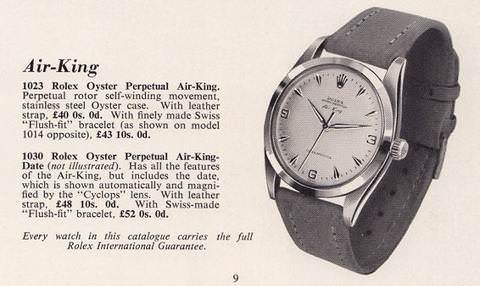 According to legend, British Royal Air Force pilots during World War II had a practice of wearing their own privately-purchased Rolex Oyster models instead of the cheap standard-issue watches that they were provided. When news of this reached Rolex founder Hans Wildsorf, he created a line of timepieces with air-themed names to honor the brave pilots who fought in the war. Among these were the Air-Lion, Air-Giant, Air-Tiger, and (most notably) the Air-King.

As these watches were intended to pay tribute to the ones worn by pilots during WWII, they were all simple time-only models with manually-wound movements and Oyster cases. The reference 4925 is often credited as being the first watch to feature the “Air-King” name on its dial, but a handful of other references were released in the years immediately after the war and many were identical to other models in Rolex’s catalog, just with the Air-King name printed on them. 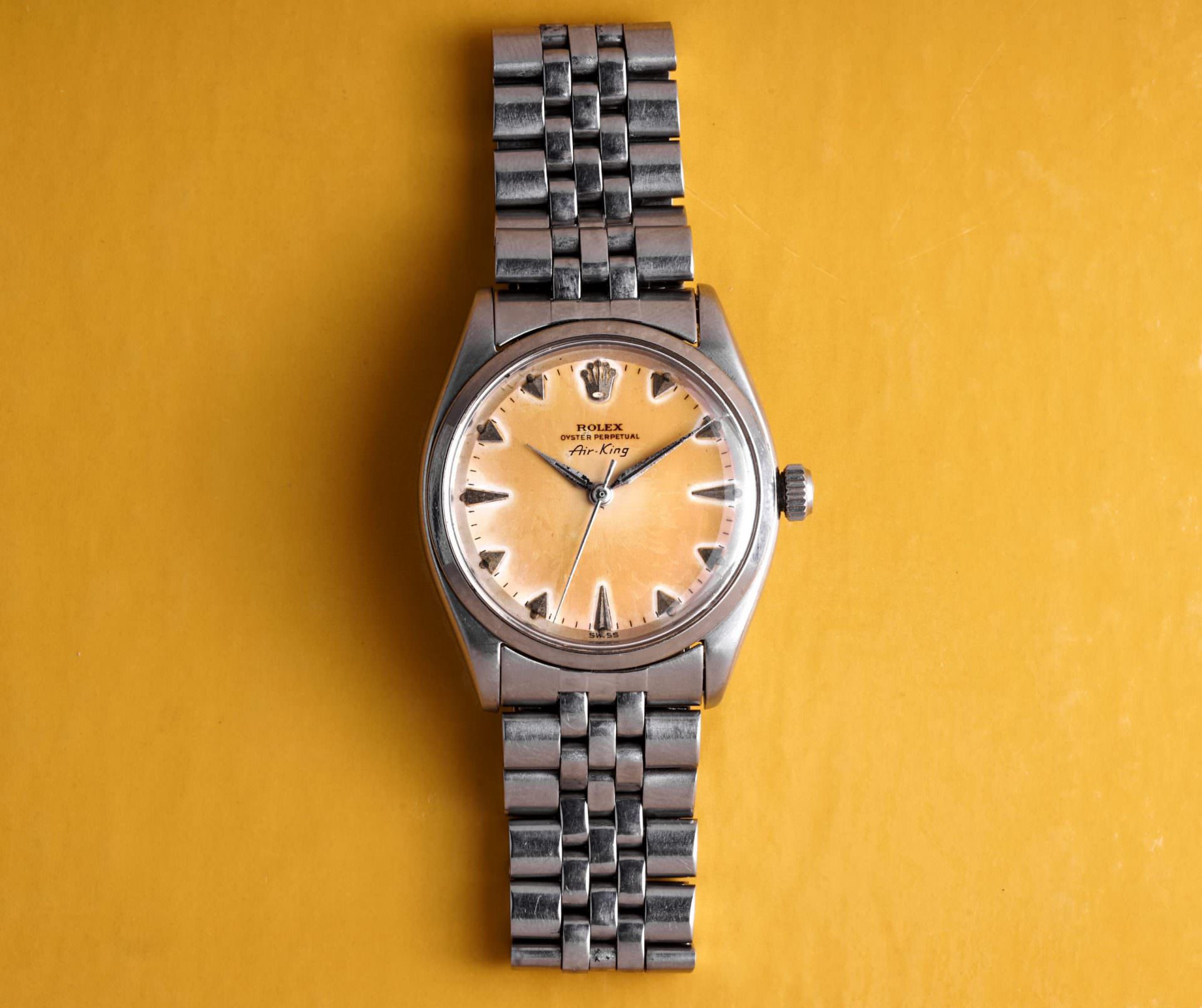 Tropical 1958 Rolex Air-King (Ref.5500) This 1958 Rolex Air-King ref. 5500 has one of the most beautiful and vibrant tropical dials that features unique triangle markers, and its original Jubilee bracelet. This is a classic and truly timeless piece that will is suitable for any occasion.

The Official Start of the Air-King Collection

There are Air-King watches that date back to as early as 1945 but according to Rolex, the first Air-King officially appeared in 1958 with the release of the reference 5500. Serial number records will reveal that there are actually ref. 5500 watches dating back to 1957, and this minor discrepancy is likely due to the difference in timing between when the watches were manufactured and shown to retailers, versus when they would have actually appeared in stores and been available for the public to purchase.

However, this does not explain why Rolex chooses to ignore the older Air-King models. The very first Datejust from 1945 and the first Daytona from 1963 did not have their now-legendary names printed anywhere upon them, yet Rolex has no problem considering these inaugural references to be the official beginnings of their respective collections. But when it comes to the Air-King, despite the fact that the name itself was used on Rolex watches as early as the mid-1940s, the brand seems to simply ignore the existence of these models and jump straight to 1958 whenever discussing the Air-King’s history. 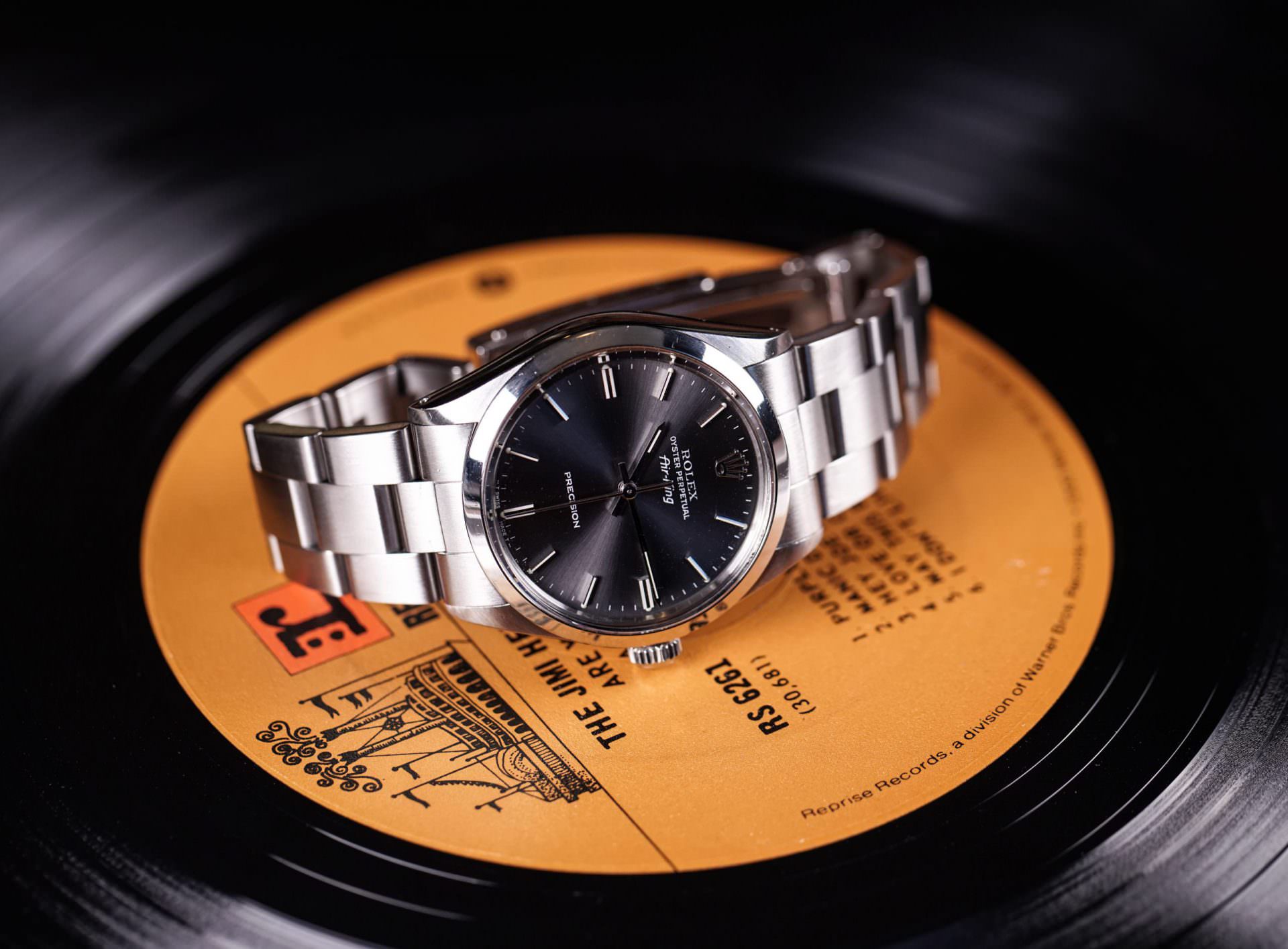 Simplicity meets the ultimate sophistication The Rolex Air-King (ref. 5500) is a classic and truly timeless piece that will is suitable for any occasion

As for the reference 5500 itself, it maintained the simple and minimalist approach to design that had been established by the inaugural models from the 1940s. While the very first Air-King watches relied on manually-wound movements, the ref. 5500 was powered by one of Rolex’s new self-winding calibers (either the Cal. 1520 or Cal. 1530) and it was produced in either stainless steel or 14k gold and fitted with a wide variety of different dial variations. Additionally, Rolex also offered a two-tone version with a fluted bezel from this generation (reference 5501), and even a date-displaying model in the form of the reference 5700.

Regardless of the specific model or the materials used in its construction, all of the Rolex Air-King watches from this generation feature 34mm cases, self-winding movements, and acrylic crystals protecting their dials. Additionally, since these models were always intended to be positioned as entry-level offerings within Rolex’s catalog, none of these early Air-King watches featured chronometer-certified movements. As simple and straightforward as a watch can be, this generation of the Air-King would go on to define the collection, and the reference 5500 would remain in production for more than three and a half decades. 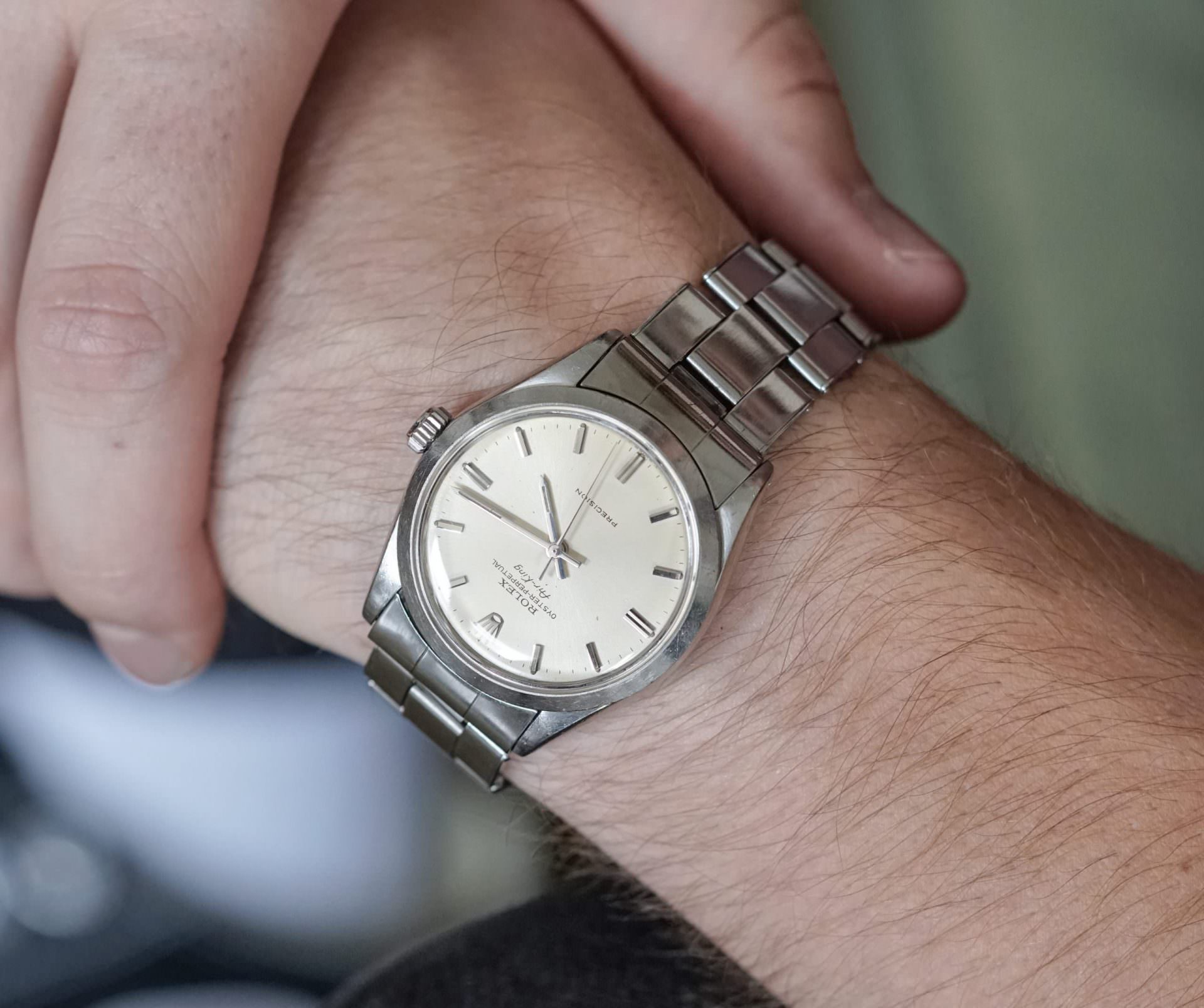 By the end of the 1980s, the Rolex Air-King was finally due for an update. However, as is often the case with Rolex, the new generation was evolutionary rather than revolutionary. Just like the previous generation, the new model featured a 34mm case, a time-only display, and a self-winding movement. However, while its predecessor was fitted with an acrylic crystal, this new generation of Air-King watches featured sapphire crystals, bringing the collection in-line with the rest of Rolex’s models.

Unlike the previous generation, the updated Air-King was only available in stainless steel, and the new series consisted of the reference 14000 (fitted with a traditional smooth bezel) and the reference 14010, which was the same watch but with an engine turned bezel. Although the Caliber 3000 movement powering the new generation benefitted from a higher frequency, it was still not chronometer-certified, and even when the watch received another movement update in 2000 with the introduction of the Caliber 3130 (which appeared in other Rolex models as a chronometer-rated movement), the Air-King still lacked chronometer certification.

The fact that the Air-King’s movement was not chronometer-rated had absolutely nothing to do with its overall quality or timekeeping abilities. Instead, the additional expense of submitting the movements for third-party chronometer testing would have required the Air-King to abandon its budget-friendly price point – something that had always been one of the model’s defining characteristics. Consequently, it would not be until the release of the subsequent generation in 2007 that the Rolex Air-King would finally become a chronometer-certified watch.

The new generation consisted of the ref. 114200 (smooth bezel), ref. 114210 (engine-turned bezel), and ref. 114234 (fluted bezel). While these models retained the same 34mm case diameter as their predecessors, they featured updated cases with thicker lugs, along with redesigned bracelets that had completely solid links and new machined clasps. Although the new watches were powered by the same Caliber 3130 movement that could be found in the previous generation, it was now chronometer-rated, finally bringing the Air-King collection up to speed with the rest of its siblings in the Rolex catalog. 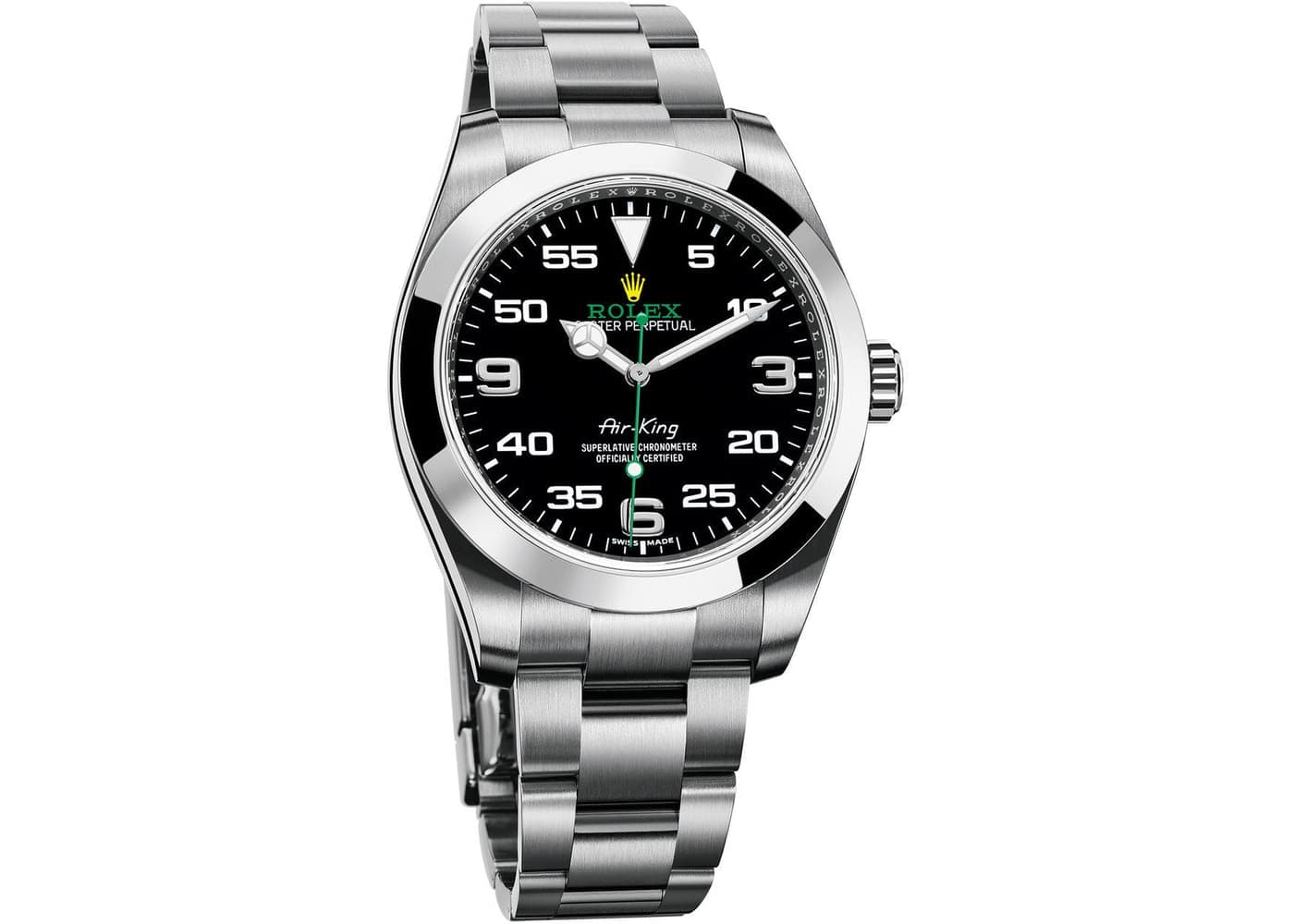 The Modern Air-King: A Milgauss in Disguise

In 2014, Rolex discontinued the Air-King collection entirely, only to bring it back two years later as a completely different watch. From the time that it first appeared during the 1940s all the way up until the model was discontinued in 2014, the Air-King had always been a simple and straightforward timepiece with no additional features or complications to support its aviation-themed name. However, when Rolex unveiled the reference 116900 at Baselworld 2016, it marked a major departure from the collection’s traditionally conservative approach and the current-production model actually has more in common with the Rolex Milgauss than any of its Air-King predecessors.

While previous Air-King watches were essentially 34mm Oyster Perpetual models without chronometer-certified movements, the new ref. 116900 is a 40mm creation that shares both its Caliber 3131 movement and case with the Rolex Milgauss, complete with the same antimagnetic components and shielding. The Air-King may lack the green-tinted sapphire crystal and slightly more-involved finishing of the Milgauss, but in terms of core functionality, the two watches are the exact same.

Due to its antimagnetic capabilities, the modern Rolex Air-King is a more capable pilot’s watch than it has ever been in its entire history. However, it has also lost a lot of the unconventional charm that has defined the collection since its very earliest days. The Air-King has always been Rolex’s tribute to the world of aviation, rather than a proper tool watch for pilots. By the mid-1950s, Rolex already had a purpose-built pilot’s watch in the form of the GMT-Master, and while the original Air-King models do follow the same general minimalist approach as the watches worn by pilots during the early days of aviation, they are a far cry from the purpose-built models that typically come to mind whenever you think of a pilot’s watch.

As a whole, the Air-King collection is emblematic of a time in Rolex’s history that has long since passed. Before the days of waitlists and manufactured scarcity, Rolex’s objective was to get as many watches into the hands of the public as possible. The very reason why the Air-King did not have a chronometer-certified movement for the majority of its history was specifically so that Rolex could keep retail prices down and offer these watches at a lower cost – something that would be entirely unthinkable for the brand to do today. The Air-King may be a bit of a departure from the highly functional, purpose-built timepieces that are responsible for much of Rolex’s legendary reputation, and it can be a bit of an enigma in the context of the brand’s overall history, but that is exactly what makes the Air-King so special.