The 1960s were a revolutionary and exciting time in American history. We had begun exploring space and had our eyes firmly locked on the moon, the British Invasion and the arrival of the Beatles turned a generation of kids into music fans and fledgling musicians, and major technological innovations were being developed across the board at a staggering pace.

The ‘60s also saw athletes and adventurers become increasingly fascinated by the idea of exploring the depths of the ocean through deep sea diving. Now, of course, man has been called to dive into the sea for centuries – seeking food, lost treasure, or just adventure. Hell, diving bells were being used as early as the 16th century – and plenty of people freedove before that! However, around 1950, scuba diving came into the picture and the advent of the scuba system meant the average person could dive for sport as hobbyists. Recreational diving was becoming a serious passion amongst the general population and as the core equipment got better and allowed for deeper dives, the accessories used in diving had no choice but to follow suit – particularly the timepieces that divers relied on to make sure they timed their oxygen levels and surface ascents properly.

Brands like Zodiac, Rolex, Blancpain had been making watches that could do just that since the early ‘50s with models like the Sea Wolf, Submariner, and Fifty Fathoms respectively. But following the 1964 Olympics in Tokyo – which featured Seiko as the official timekeeper – the Japanese decided to take the plunge into the world of deep sea diving as well.

With a history dating back to 1881, Seiko has had numerous revolutionary watches and horological innovations to brag about, and the brand’s name is synonymous with dive watches at this point; the silhouettes of their bold dive watch cases are known by all watch collectors, and the brand’s “Turtle” models have been worn by everyone from celebrities and major watch collectors, to high schoolers and octogenarians.

Up until that point, the only watch Seiko had developed that was meant for use in anything deeper than a kiddie pool was the Silverwave J12082. Featuring an inner rotating bezel and the 20-jewel Seikomatic 603 movement, the Silverwave was a novel first try. Its 50m resistance rating meant it had limited capability and wasn’t suited for the gig as people pushed the sport’s boundaries and depths deeper and deeper. And its relatively short production window from 1961 to 1964 showed that Seiko saw something bigger on the horizon. 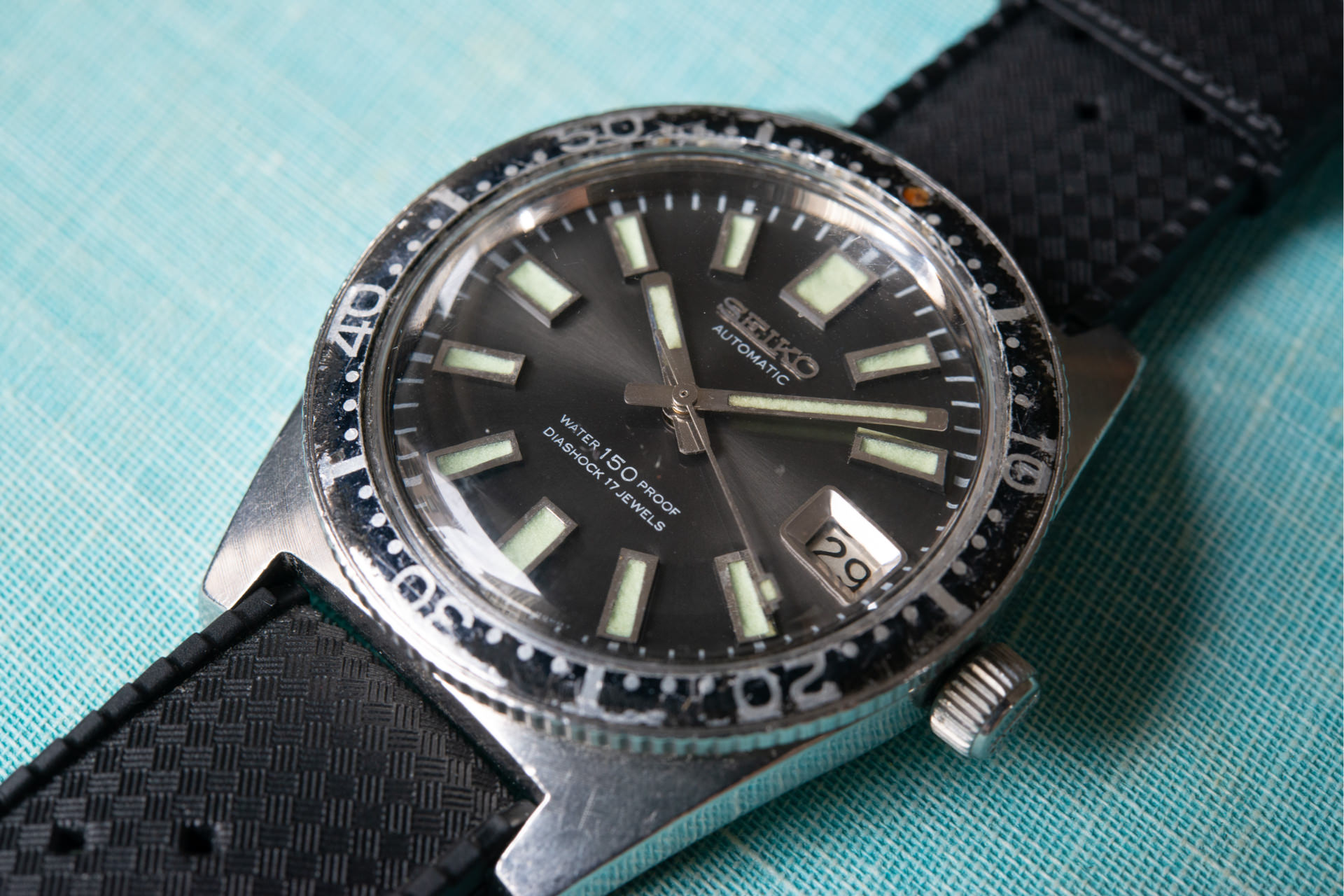 That something was the Seiko 6217-8000/1, which launched in 1965 and, while it wasn’t Seiko’s first waterfaring watch, it was the brand’s first serious, professional-grade dive watch. It was also the first one that found its way into the hearts and minds of enthusiasts and collectors.

The 6217-8000/1 is also known as the 62MAS – a shorthand call sign that came from a combination of the first two digits of the reference number, the “MA” from automatic and the “S” from self-dater, indicating the watch’s automatic movement with date complication. This legend-in-the-making featured a chunky 37mm case (which was considered large at the time), featured Seiko’s very first external rotating bezel, and was powered by the Cal. 6217 movement.

The 17-jewel Cal. 6217 had a heartbeat of 18,000 bph and was actually the same movement used in the first edition of the Seiko World Timer – which was created to commemorate those ‘64 Olympic games. That movement was a no nonsense powerhouse that was found in a whole range of automatic watches that the brand referred to as “Seikomatics.” Perhaps most importantly, this movement was also offered in Chronometer grade within the Seikomatic Chronometer, an incredibly important watch that eventually became the 62GS – the first automatic watch to wear the hallowed Grand Seiko badge. But it wasn’t only its movement that made the 62MAS so remarkable when it debuted! 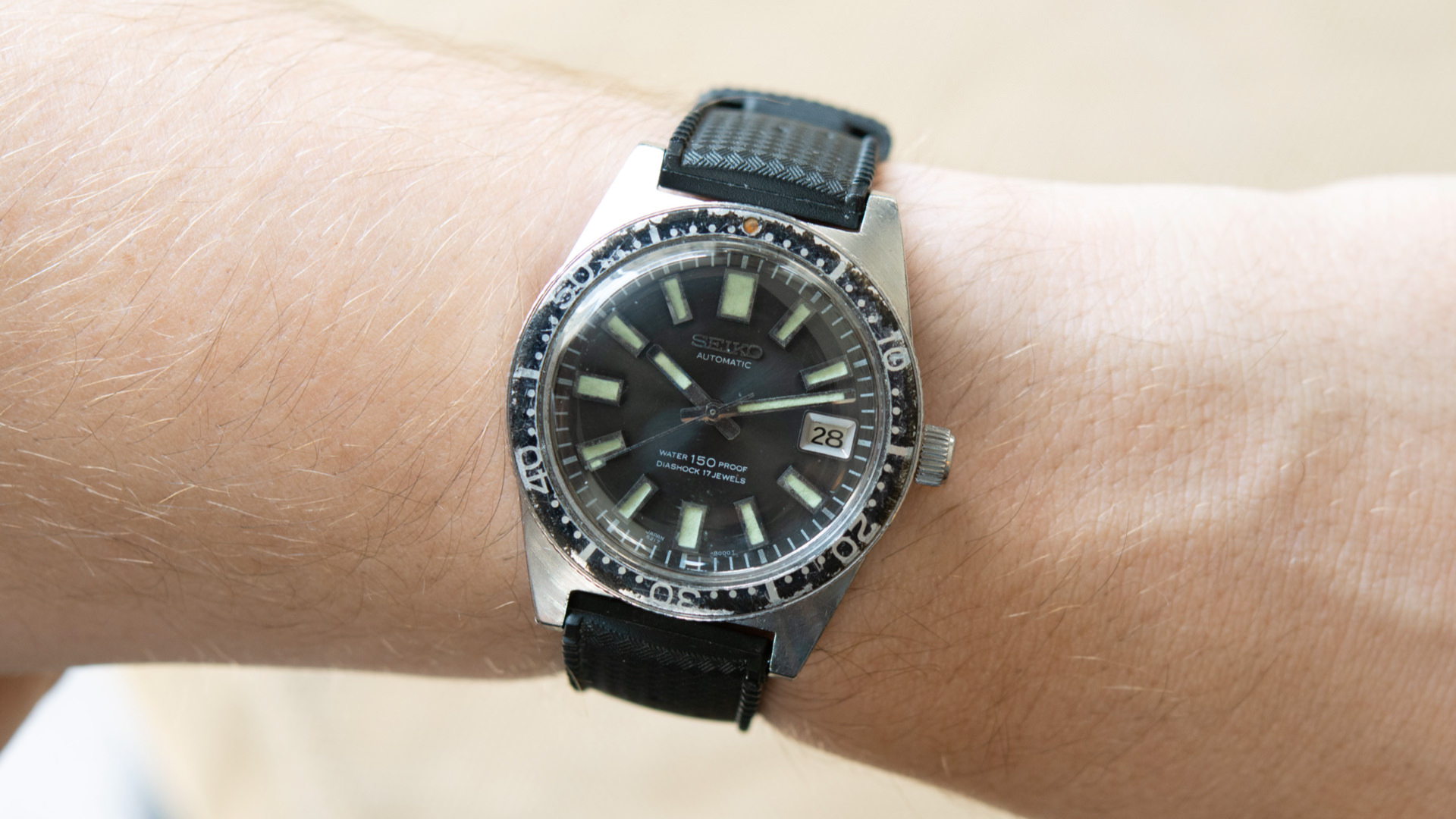 Aesthetically, the 62MAS’ unique dial – a not-quite-gray, not-quite-green backdrop that’s lovely to gaze at, even if you’re not actively checking the time – set it apart. It featured large and legible applied trapezoidal markers embellished with chrome borders and a rare-for-Seiko lume that shone bright enough for those deep water adventures. And that aforementioned external rotating bezel was not just the very first of its kind within the Seiko stable, it also featured a font that can still be found on many of today’s most popular divers. The rubber “tire tread” strap these watches were originally supplied on remains a favorite among collectors.

These watches featured a screw down caseback, which when paired with gaskets at the crown and stem, offered triple the water-resistance rating of the Silverwave and enabled the 62MAS to function at depths of 150m without risk of damage. While 150m is not that deep by today’s standards (and the genius engineers at Seiko had already developed the technology to certify a watch with a 300m depth rating by 1967), 150m was more than enough for just about any serious diver in the mid-’60s.

Clean examples of the early versions of the 62MAS, the 6217-8000, are increasingly rare these days due to only having been produced for roughly 2 months (April and May of 1965, by most approximations) before the 6217-8001 was released. The main difference between the two references is the former’s smaller, 5.5mm non screw-down crown. Considering that this was a tool watch first and foremost, functionality was key and Seiko quickly realized that the size of its crown made it difficult for gloved hands to grasp and rotate. So, they promptly updated the watch with a larger crown that was much more functional for the task at hand. 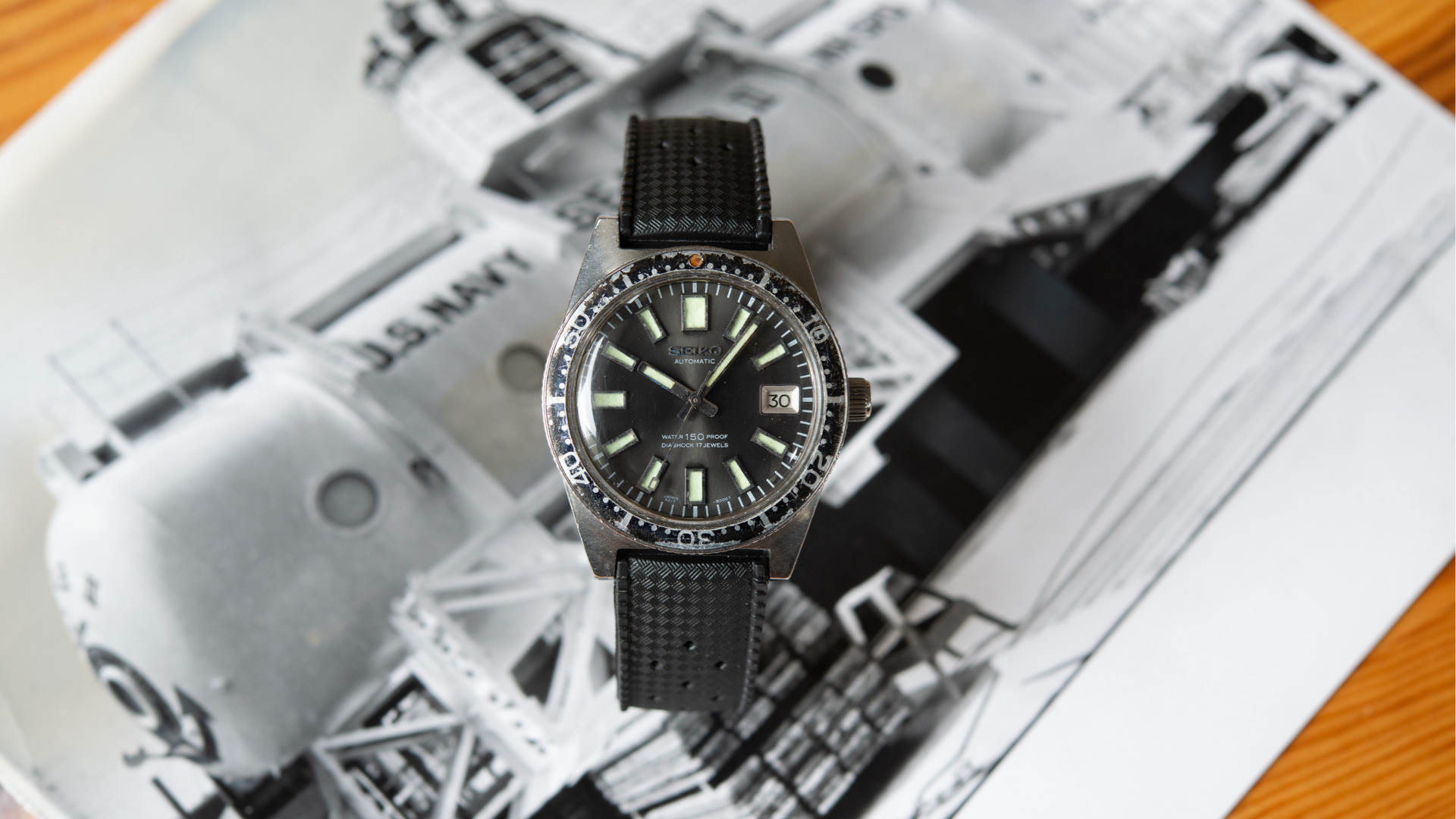 The 62MAS’s crown was also one of the only crowns within the entire stable of Seiko divers (past and present) that actually had the brand’s name printed on it. And the 62MAS was (and remains) the only professional Seiko dive watch with the crown placed at the traditional 3 o’clock position instead of the 4 o’clock spot we all associate with Seiko divers.

While the crown was the largest and most noticeable difference between the 8000 and 8001, there were a few other notable changes. The 8000 was only produced a caseback that was engraved with the dolphin logo that was used on other Seiko “waterproof” watches. However, the 8001 can be found with a few variations of dolphin-engraved casebacks, as well as the “horseshoe” caseback design which was gaining popularity in-period. All of the casebacks feature the words “STAINLESS STEEL” and “WATER PROOF” in addition to either the “6217-8000” or “6217-8001” reference numbers.

One of the biggest votes of confidence the Japanese ever bestowed upon the 62MAS – and what served as a proving grounds for the watch itself – was issuing them to Japan’s 8th Antarctic Wintering Team on a 3 month expedition in 1966. This expedition exposed these glorious divers to some of the most brutal conditions on planet earth and if they could handle that, they could handle anything..

The fact remains that the 62MAS was a revolutionary watch at the time, and an important forefather to some of the coolest, most rugged, most dive-worthy watches ever created. More than that, it was a watch that captured the hearts and minds of a generation just beginning to explore the boundaries of adventure and exploration – as well as those of generations to follow, who would appreciate the beauty, the legacy and the sheer audacity of this beautiful watch.

Josh Eck is a freelance writer based in Los Angeles, CA. When not moonlighting as a watch nerd, he splits his time between being a writing director for digital products, a husband, and a dad. Any time he has left is usually spent sipping mezcal.