Meet Micheal Rapetti of the Motoring Club: If He Builds It, They Will Come.

It’s a Sunday morning at the Motoring Club in Marina Del Rey, California; a few dozen people have gathered together to watch the Canadian Grand Prix, and Michael Rapetti is sprinting around his clubhouse like one of Max Verstappen’s mechanics prepping tires for a pitstop.

He checks the snacks in the kitchen area, chats with a group of members by a Jaguar engine block that’s been converted into a coffee table, darts over to restock two large coolers of beer and sparkling water, then runs into the open garage area to move a vintage Land Cruiser out of the way and free a Mercedes AMG from behind it. The crowd gathered to watch the race is a diverse mix of people who have chosen to join a membership club based on a curiosity and passion for cars and driving. Rapetti founded the Motoring Club five years ago; now, guided by his membership and inspired by an enthusiastic community, he’s embarking on his most ambitious project yet— an all-new clubhouse to accommodate the Motoring Club’s roster of over 400 members.

Back in 2015, Rapetti had a life in New York. He had a job at a big tech firm, a girlfriend, and a passion for cars. But like many of us, he’d scroll through Instagram feeds choked with images featuring LA’s vibrant car scene, and he couldn’t help but start dreaming. 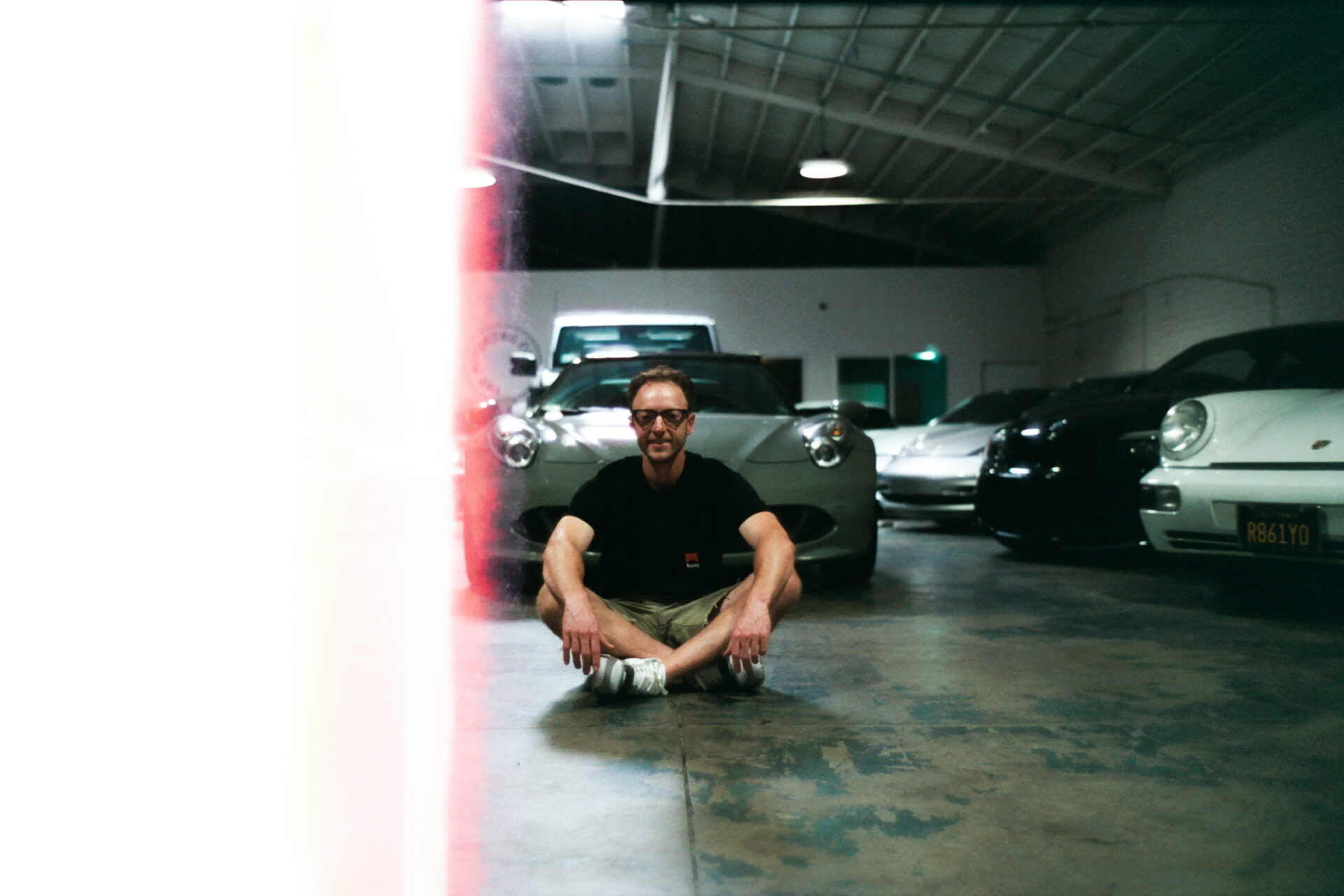 “I was enamored with LA car culture from afar, watching car folks on Instagram start to gain traction. At the time, it was Ted Gushue and Magnus Walker doing cool stuff in LA.”

Rapetti admits the thought of a full-time car-focused hangout was an idea almost every car enthusiast has had at one time or another, but he saw things differently. “I wanted something more casual, a day-to-day coffee, co-working vibe where it was a little more people-centric than car-centric,” Rapetti says, continuing “A club for everyone with a low cost of membership.”

Rapetti decided to make his dream a reality; he left his job, broke up with his girlfriend, he packed up his Audi SQ5, and moved out to Los Angeles. “It was kind of a life freak-out moment, where I just ripped the Band-Aid off everything” he remembers. 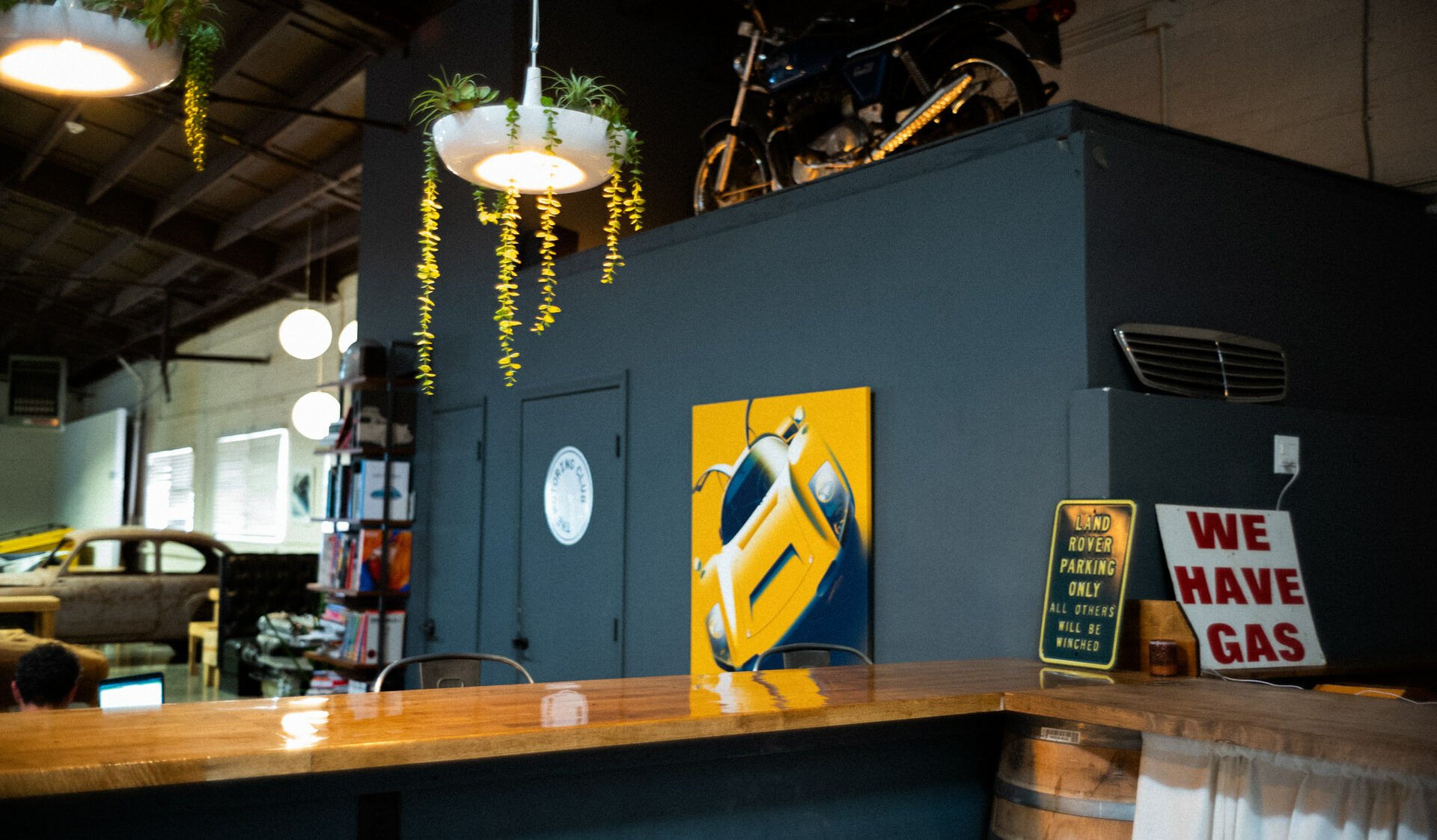 The freshly-minted East Coast expat arrived in LA energized, curious, and maybe a little naive, and he’d soon have to prove if his idea could really work. He eventually found a large warehouse in Marina Del Rey that, like many of the spaces in the area, was slated to become condos. In Rapetti’s own words, he was “crazy enough” to sign the lease.

“I wanted to meet people, connect and see what it’s about. Luckily, I was met with positive people who share my passion. LA was way more welcoming and chill than I had assumed with LA car stereotypes.”

And connect Rapetti did. Walking into the Club today, you’ll be greeted by an eclectic mix of creatives, entrepreneurs, and industry people scattered around an equally eclectic mix of cars arranged throughout the space. Often there’s a 911 Carrera, a ’73 BMW 2002, and a pair of gorgeous Ducatis arranged nose-to-nose just behind the sofa. Sometimes, a manufacturer will debut a new model at the Club, and recently Alfa Romeo left one of their F1 cars at the Club for the members to drool over. While most members are collectors and drivers, some are just curious about cars and it’s not uncommon to see someone looking to buy their first car mingling with another member with 30 cars in their collection. “I want to make sure people feel like they can come in, join the Club, and hang out at an event – even if they don’t know anything about cars. I want to attract a wide range of people,” Rapetti says. “It’s not the car you drive, it’s who you are as a person.”

He might be onto something. At a time when many are predicting the death of driving, with car culture threatened with being relegated into a dark corner full of archaic hobbies, places like the Motoring Club may serve an essential need. “I think it’s an interesting time with EVs and California trying to ban sales of gasoline cars. People are asking ‘Why are you starting this type of business,’ but the reality is, this community and lifestyle will grow even stronger. I want to make sure the younger generation is preserving these cars, and we can be a part of that.”

Today, Michael is in the final stages of his own restoration project, but this one runs on caffeine.

In the coming months, Michael will move The Motoring Club to a new location. The new 19,000 sq. foot space will house a member lounge, co-working space, member car storage, and a new, public-facing coffee shop and retail component. And like any construction project, it has been brutal. 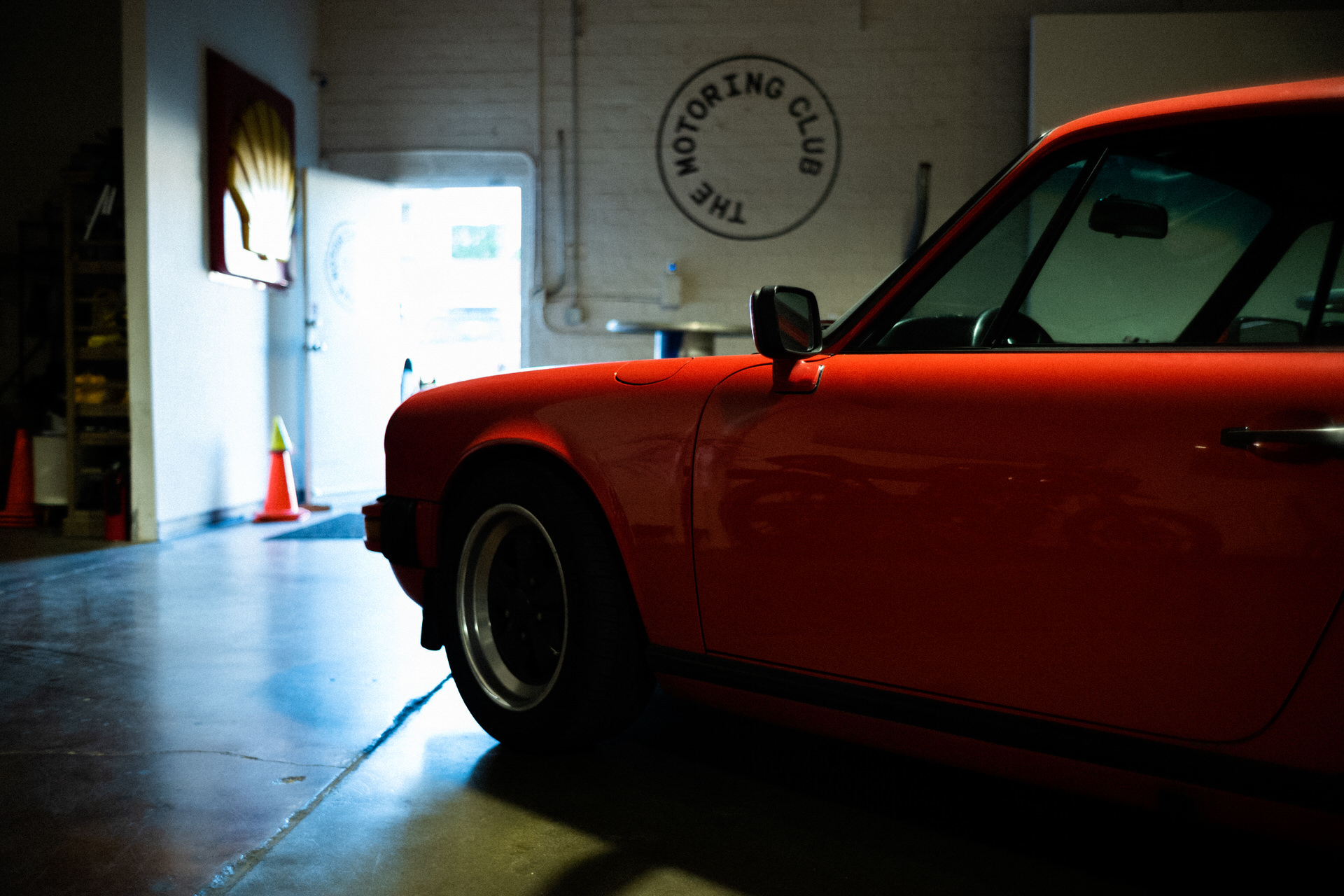 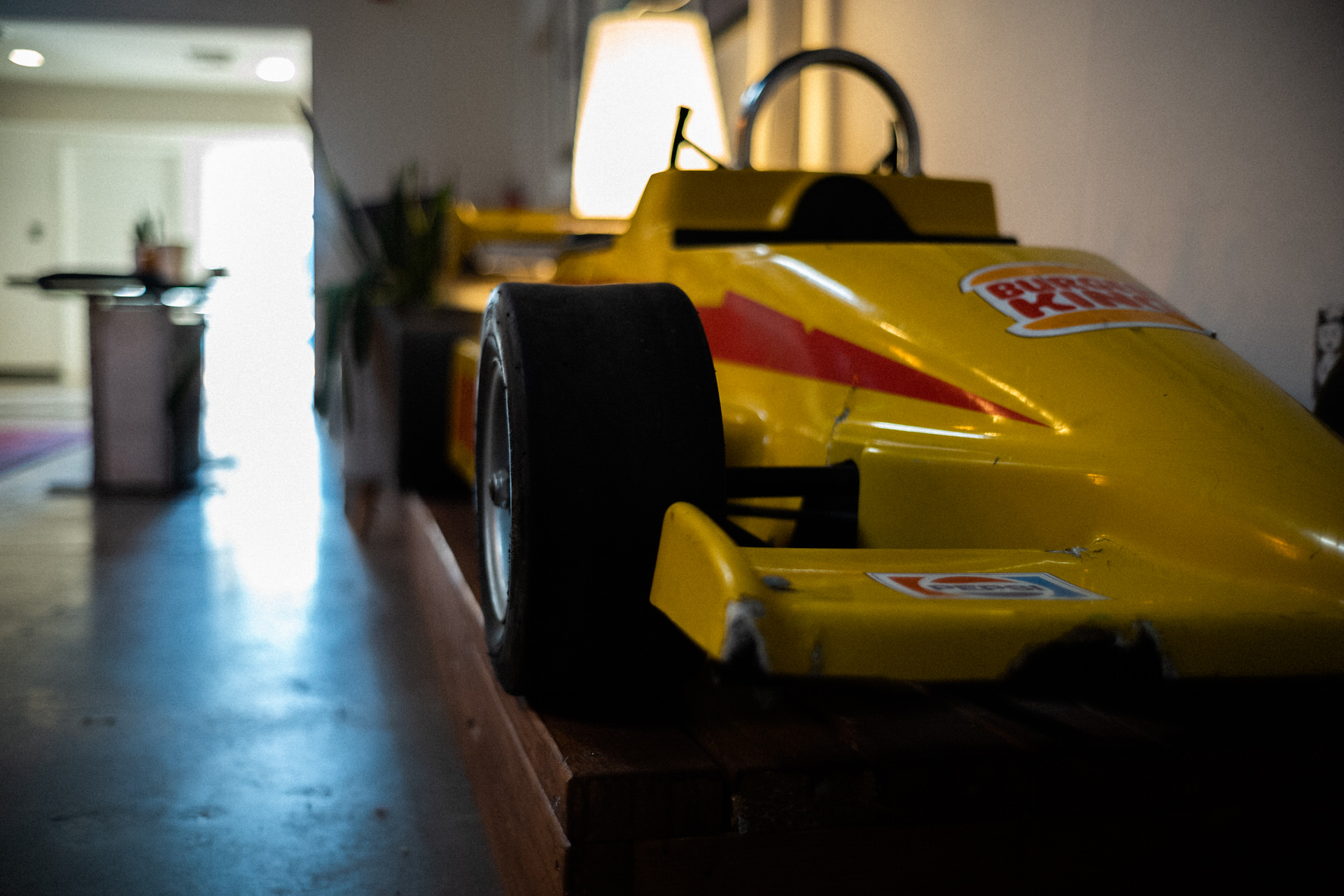 It turns out the Los Angeles commercial building code doesn’t have a category that covers a membership club/retail/coffee bar/car storage space. “It’s not in the code because no one’s ever done it before,” Rapetti explains, as he rattles off the series of setbacks he’s encountered in building the new location. From a severed water line that was going to take fifteen months to repair to a closet inspection that took a whopping three months, it’s been a handful. “Until you’re in the weeds, you have no idea how crazy and backward so much of this stuff is. There’s nothing allowing small start-up businesses to succeed,“ Rapetti laments.

Getting the new spot opened is costing Michael twice the time and twice the money he’d anticipated, but he remains as focused and determined as the day he first set foot in LA. Now, with his permits cleared, he’s putting the final touches on a space that looks spectacular – even in its rough drywall state. 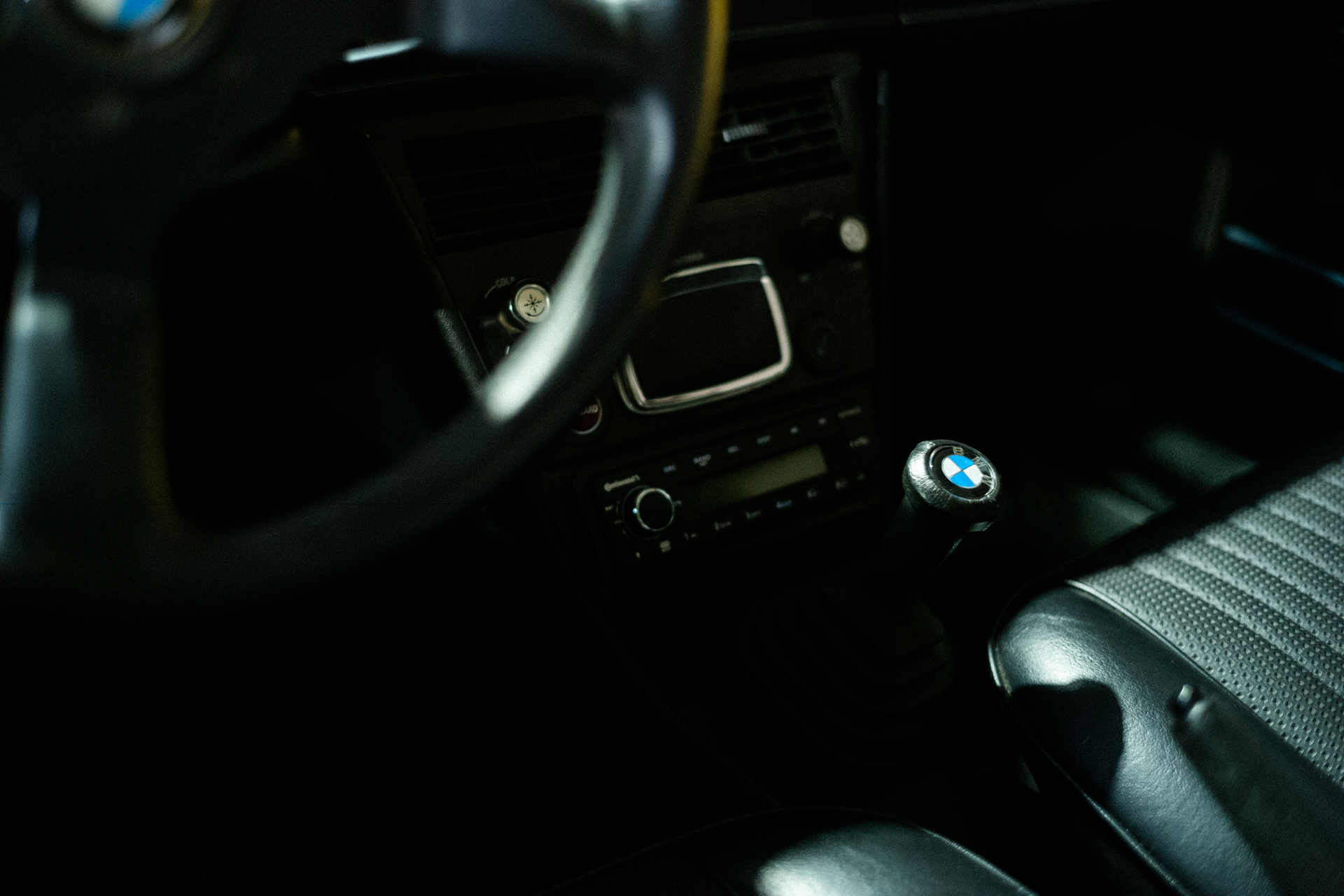 When asked what he gets out of his role in the Club, Rapetti pauses for a beat. “I’m so in it, I don’t have that much time to reflect. I’m the one organizing the drives. I’m the one cleaning up after the events. What I’m getting out of it is an excitement, and a satisfaction that I had this vision, and now with around 400 people as part of this community, people will say ‘Hey, this has given me the community I’ve always wanted.’ That’s what fuels me,” Rapetti confides. “I have to pinch myself once in a while when I’ll be somewhere random and see a Motoring Club hat. It’s now becoming part of the LA scene. It makes me excited when I see people joining for so many different reasons, seeing people learn more about cars after joining, and people making genuine friendships. I’ve seen people dating because they met at an event here. I feel like a proud dad sometimes. I’ll see a few members who met through the Club, and now they’re going off on a drive together. That was my whole goal, to create these relationships.”

A community of any kind has a way of scratching an emotional itch in our hearts we’ve probably had since mankind lived in caves. There’s a comfort in belonging, a joy in forging friendships over a shared experience. While no one is shouting “Norm!” or “Cliff” from across the bar, it’s safe to say that if you wander into the Motoring Club, you’ll likely strike up a conversation with a fellow enthusiast about your favorite route through the Malibu canyons or the body-colored wheels on the Club’s 2002. And after a beat, Michael Rapetti will undoubtedly come over, offer you a drink, and ask you what you’re driving. After all, you’re part of the scene, and that is what car culture is all about.

After decades in the entertainment industry, John now writes for Porsche Panorama, Christophorus, R&T Crew, and The Motoring Journal. Mainly about the emotions, experiences, friendship, and joy the right car in the right situation can provide. You’ll find him in a record store, carving the canyons around LA in his 993, or navigating the school drop-off line in his 924.

Film and Digital Photography by Vik Soos @viksoos on Instagram.