Shining the Spotlight on Cinematographer’s Watches

The final decades leading up to the arrival of the quartz movement were a golden era for mechanical timepieces. It was during these years that we saw the proliferation of the tool watch and an incredibly wide range of purpose-built models, with each one designed to serve a specific function.

While this period ushered in now-ubiquitous categories such as the dive watch and regatta timer, we also saw the birth of a far more obscure purpose-built timepiece: the cinematographer’s watch.

If you are reading this, there’s a fairly good chance that you’re already well-acquainted with most types of tool watches and likely even own a few of them. Most tool watches are relatively self-explanatory and it’s easy to envision how they serve their intended purposes. A dive watch measures elapsed time underwater and a regatta timer counts down to the start of a boat race, but when it comes to cinematographer’s watches, it isn’t immediately obvious what they even do, let alone how they are supposed to help filmmakers with their daily tasks.

A Watch for Filmmakers

Even during the height of purpose-built mechanical timepieces, cinematographer’s watches have always been one of the more obscure varieties of tool watches. Nearly every brand jumped on the dive watch bandwagon during the 1950s and 1960s, but only a small handful of companies ever produced watches specifically designed for filmmakers, with the most notable being Universal Geneve, Gallet, and Enicar. 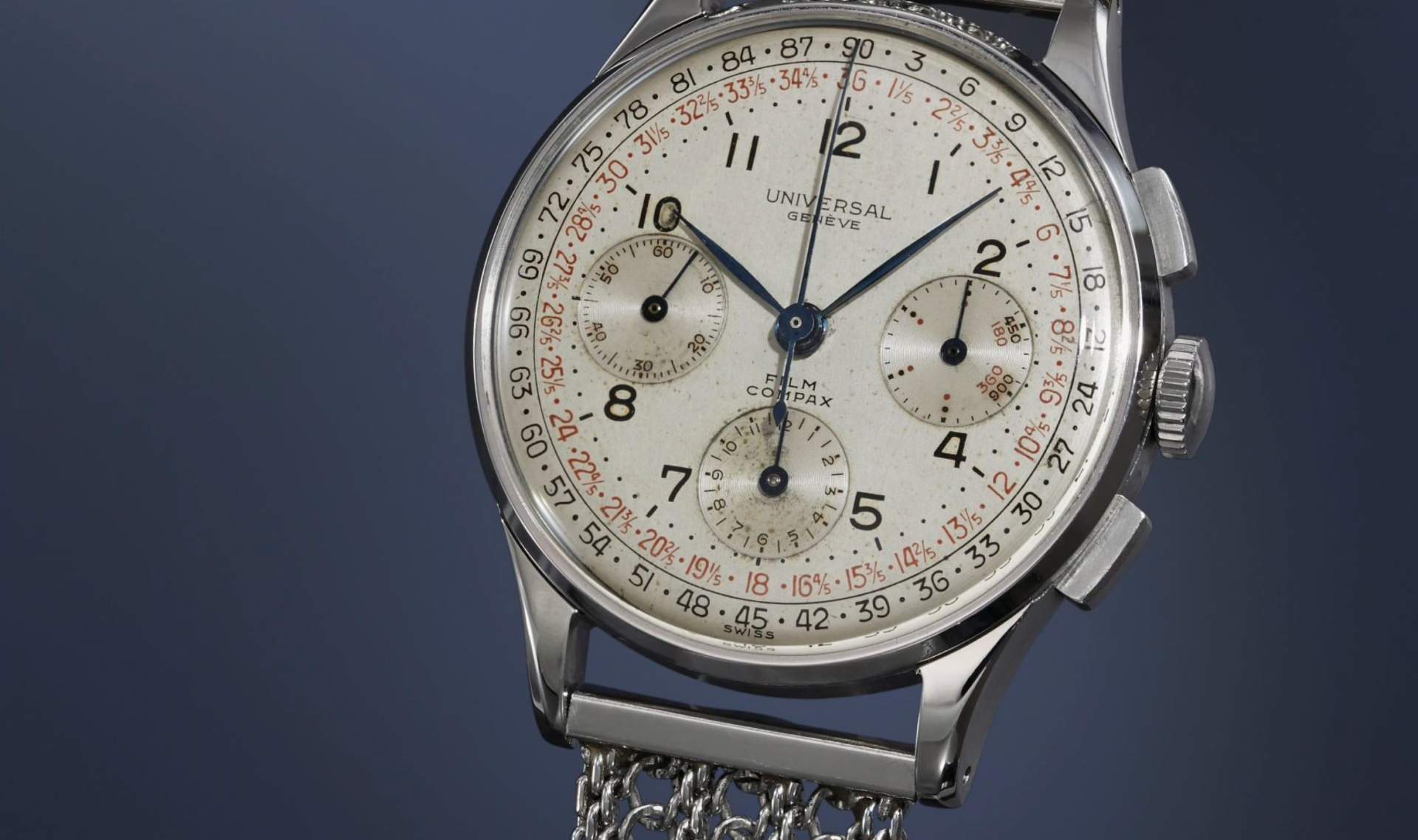 One of the earliest examples of a cinematographer’s watch is the Universal Geneve Film Compax, which dates all the way back to 1945 and was produced in extremely small numbers, presumably for the U.S. market. However, this often-overlooked category of tool watches saw a slight revival in popularity about a decade and a half later during the years when the idea of the tool watch had fully taken hold of the industry.

At the start of the 1960s, following the introduction of Techniscope (also known as 2-perf, a 35mm film format), Enicar released a special version of its Sherpa Graph watch that was intended specifically for film editors and cinematographers. Just like the standard Sherpa Graph, the timepiece was a three-register chronograph, but rather than having a tachymeter scale printed along its inner bezel, it featured a unique scale that displayed both the number of frames and corresponding length of film that would be used in a given amount of time.

In the same way that a racing chronograph calculates either speed or distance by featuring a centrally-mounted seconds hand that reads a measurement of time against a tachymeter scale, cinematographer’s watches such as the Enicar Sherpa Graph and Universal Geneve Film Compax work more-or-less the same but with their special filmmaker’s scales. While some degree of approximation is required, this unique feature elegantly provides its users with a quick point of reference.

The older Universal Geneve Film Compax watches featured scales for both 16mm and 35mm film in accordance with the old industry standard of 24 frames per second, while the Enicar Sherpa Graphs were fitted with two different variations of the cinematographer’s bezel and examples can be found with either 24-frame and 25-frame scales, depending on the market in which they were originally sold. By reading the chronograph hand against the scale printed along the inner bezel, cinematographers could easily see roughly how many frames they had shot and how many feet of film they had used by simply referencing the watch on their wrist.

As a whole, tool watches are a rather obsolete concept now that we have a plethora of advanced digital devices at our disposal that do far more than even the most advanced tool watches from the golden era of mechanical timepieces. A quick look around will confirm this for you, and everything from your computer and cell phone to your television set and microwave all are capable of telling you the time with incredible accuracy, and many of them are even able to set themselves. 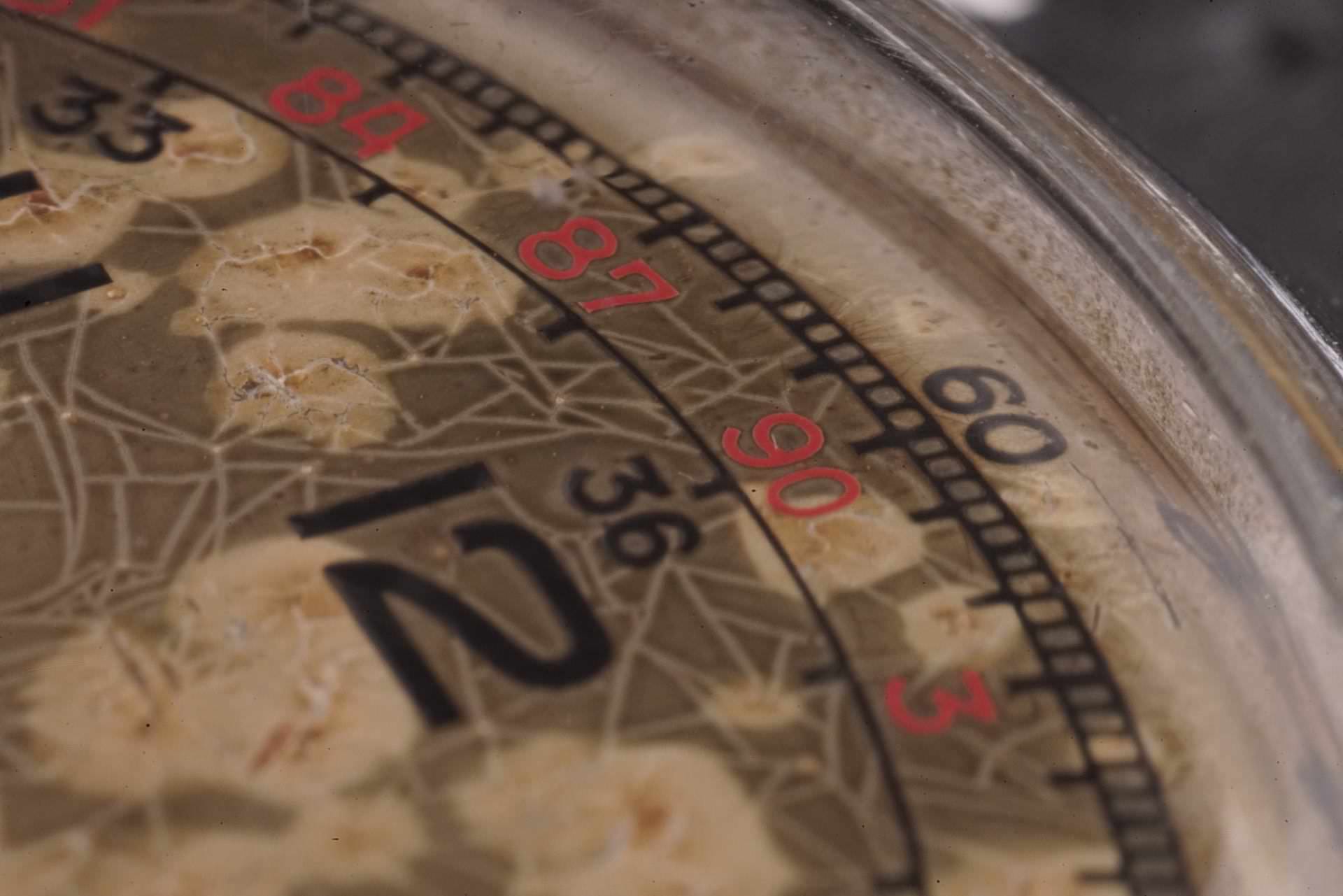 It's about the Details Film bezel on a vintage Gallet timepiece

Now, I will gladly admit that modern technologies rarely provide as tactile or enjoyable an experience as their vintage counterparts. However, the fact remains that these modern  conventions objectively do a better job of performing their intended functions. A dive computer is exponentially more useful than a mechanical watch if you are actually going to be scuba diving, but if you really wanted to venture underwater with nothing more than your dive tables, a depth gauge, and a vintage dive watch, you could still go diving just fine.

However, when it comes to cinematographer’s watches like the Universal Geneve Film Compax and these rare editions of the Enicar Sherpa Graph, the same isn’t exactly true. The specialized filmmaker scales printed along their inner bezels are really only useful if as you are using actual film. Digital video recording is increasingly becoming the standard for most applications – especially on a consumer level, and while these cinematographer’s watches are still capable of performing their intended functions, the circumstances that call for them no longer exist. 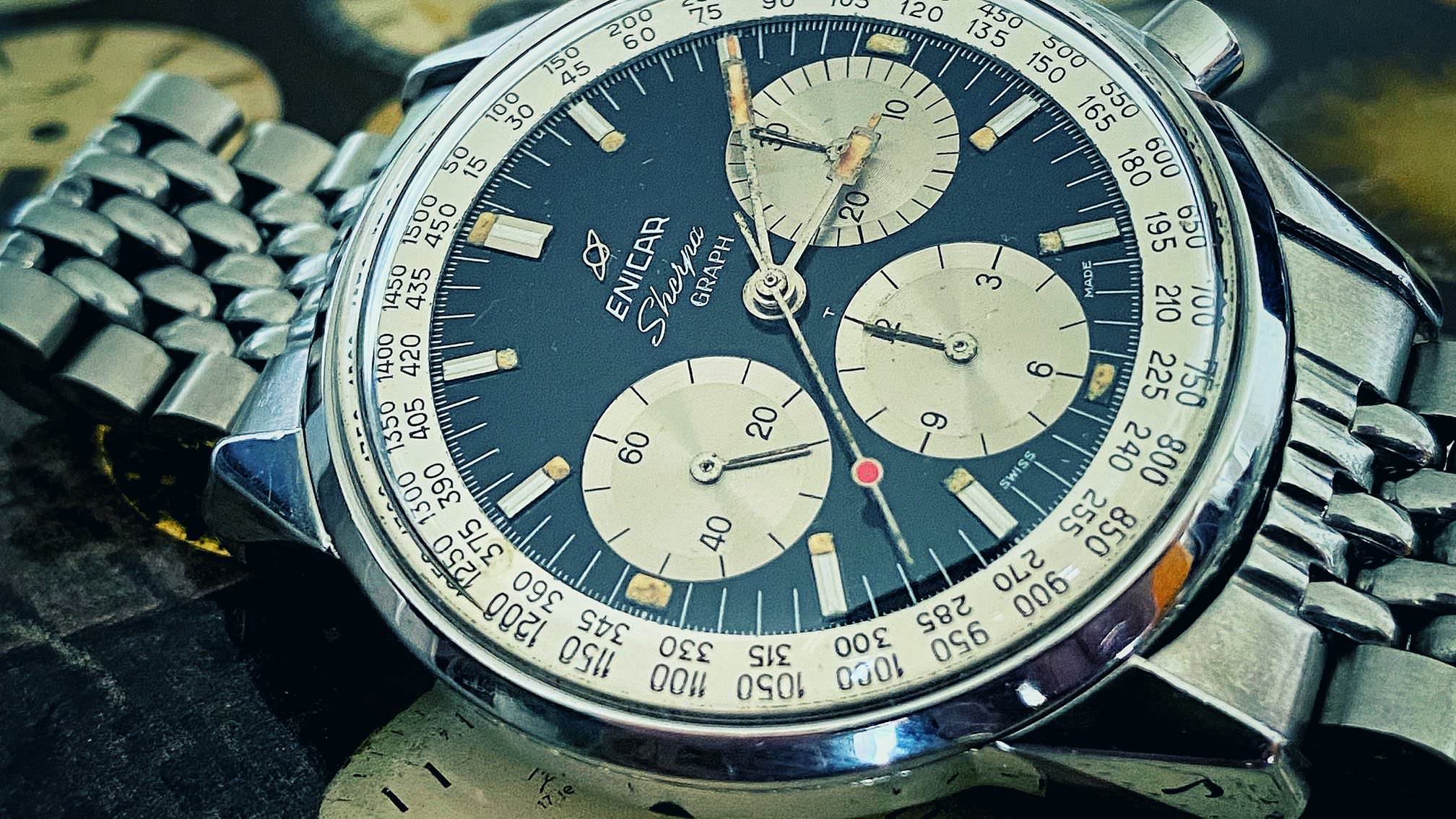 These filmmaker’s watches were likely never used by those working on high-budget sets or in well-equipped studios. Instead, these watches were really more intended for those working out in the field, where they would be performing tasks such as doing scientific research, reporting on news stories, or gathering footage for documentaries. While film is still used as a format and frequently plays a role in major studio movies (for example, IMAX cameras are film cameras), seldom is it used for demanding high-intensity applications as it is more expensive, more fragile, and requires the use of significantly more (and larger) equipment.

These cinematographer’s watches aren’t just obsolete because we now have digital versions that are more practical for us to use. The entire recording medium that serves as the basis for their intended purpose is slowly becoming replaced by increasingly advanced digital alternatives, making these unique tool watches representative of simpler times, and an era that has long since passed.

A Tool Watch to Meet Every Need

I’d like to imagine a small crew of filmmakers camped on the side of a mountain, gathering footage for a nature documentary, and using their Enicar Sherpa Graphs to help them calculate how much film they had used in the previous scene. Given the unique nature of their intended purpose, who knows if these filmmaker’s watches ever saw the same rigorous, in-the-field use like some of their vintage dive or pilot watch siblings, but the fact that brands such as Universal Geneve and Enicar went so far as to create timepiece specifically for the filmmaking crowd really puts into perspective just how vast and diverse the category of tool watches was during the glory days of the mechanical movement.

A big part of our fascination with tool watches has to do with their purpose-built nature. We love these timepieces because of what they can do, and this still remains true regardless of whether or not we actually have a practical use for them. Despite the fact that they have been largely replaced by computers and other digital devices in our modern lives, we still love tool watches because of what they represent. They are the final and most creative applications of the mechanical movement and arguably more than any other type of watch, they are emblematic of a time when this technology was both considered cutting-edge and necessary.

On paper, cinematographer’s watches may be the most obsolete form of tool watch, but that is precisely why they are so fascinating. A dive watch can still measure elapsed time underwater and a doctor’s watch can still help you take someone’s pulse, but a scale specifically designed to help track the use of 35mm film has absolutely zero applications when using a digital format. However, part of our fascination with tool watches has to do with the ways that humans were able to take the concept of the mechanical timepiece and apply it to different uses – and in this way, these timepieces for cinematographers are easily some of the most fascinating tool watches of them all.