It really does go without saying that throughout history, few have left a mark on the world as notably as Miles Davis.

Over the course of his career, Davis explored a variety of daring musical avenues within the framework of jazz, earning him international acclaim whilst influencing his peers. Though in addition to pioneering styles and advancing jazz through now celebrated sessions and recordings, the American trumpeter, composer, and bandleader had truly ineffable style, which should come as no surprise. Stories and photographic efforts of those who surrounded Davis can now be referenced to paint a vivid picture of just exactly how impeccable the man’s taste was, which we’ll now explore. First things first, let’s address the horological pursuits. The earliest photographs documenting Miles Davis’ career rarely show him wearing an identifiable wristwatch or any watch at all for that matter. Given the infancy of his career, and celebrity as a whole, the situation adds up. This would soon change, as Davis would later be seen in 1955 wearing a small, rectangular watch in gold, which was fitted to a gold link bracelet. While some speculate it might have been manufactured by LeCoultre, little is known about this watch leaving it as a mystery as to what the watch was, who it was made by, and where the watch is and if it still exists.

"For me, music and life are all about style..."
Miles Davis 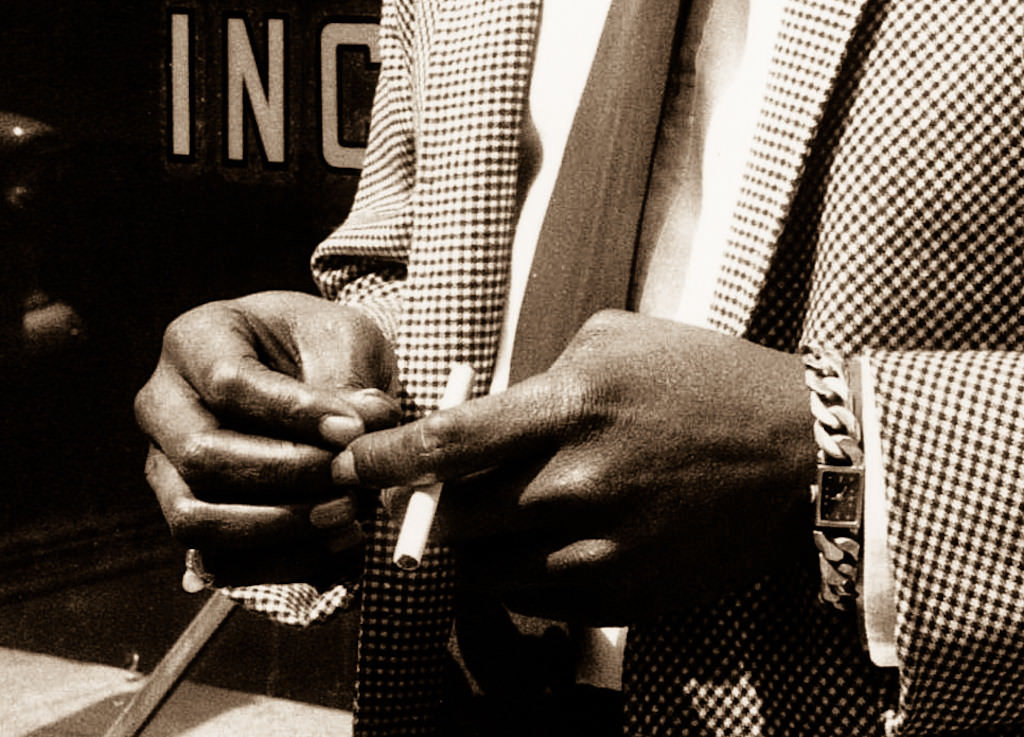 Fast forward to the later 1960s, and Davis can begin to be seen wearing a black and white chronograph on his wrist. Unlike the aforementioned timepiece, this is known and confirmed to be a Ref. 806 Navitimer by Breitling. In the following years, the man could also be spotted wearing what’s believed to be a Jaeger LeCoultre Memovox GT Ref. E861 on a bund-style strap (as pictured in the header photo), though the Navitimer remained a constant throughout Davis’ life, with roughly three decades of photos to support this notion. 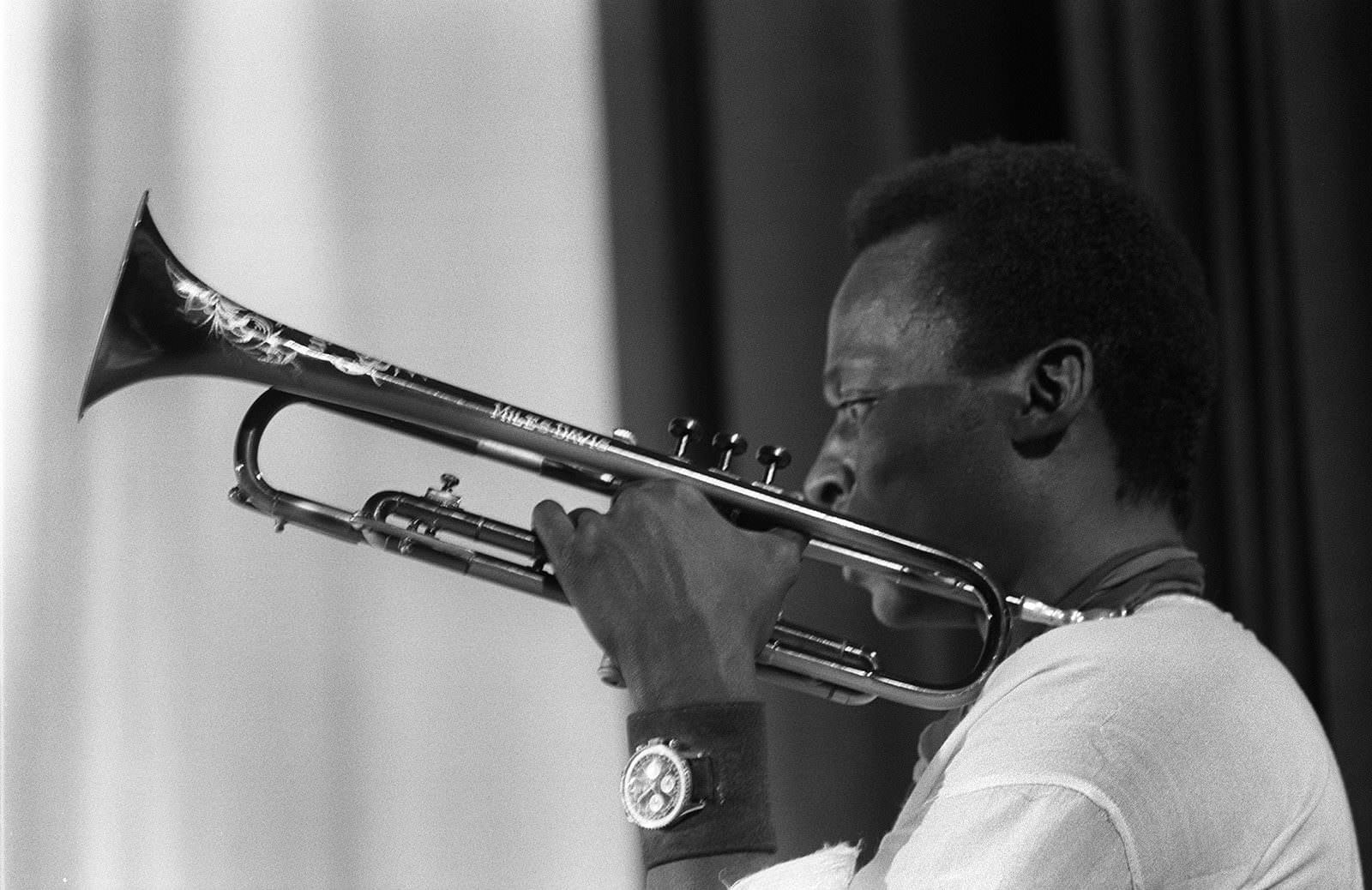 Going into the 1980s, as both the music and personal life of Miles Davis continued to change and propel into previously uncharted territory, so did his personal style, which took a decidedly more dramatic turn. During this era, Davis can be seen regularly sporting a yellow gold Rolex Day-Date, featuring a diamond bezel and potentially a diamond dial, as well. Once again, this is a watch known only through photos, making its reference unclear. Having said that, this is most likely either a Ref. 1803 or a later Ref. 18038, given when in history it can begin being seen on the wrist of Miles Davis. 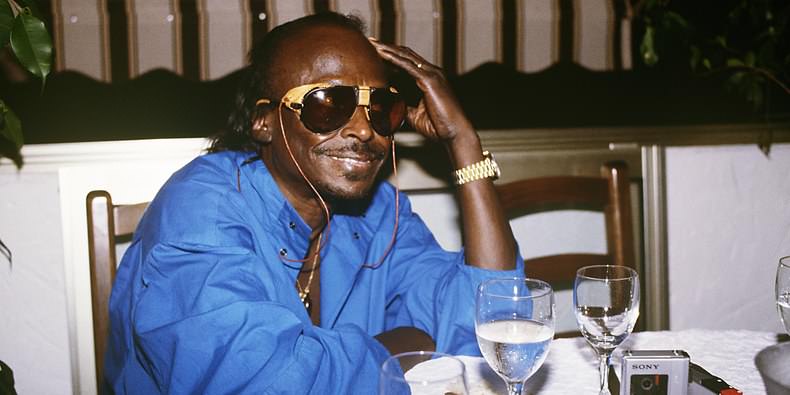 With watches out of the way, no discussion of Miles Davis’ toys and trinkets would be complete without mention of the musician’s love for sports cars. This is where things really get exciting. Davis had a particular taste for Italian sports cars, and he can’t be blamed, knowing the exhilarating automobiles to come out of Italy in the golden era. Like many others, Miles Davis became enamored with Ferrari, which in retrospect can be seen as his marque of choice. Knowing that he owned and drove a 1967 275 GTB/4, along with a later 308GTSi in yellow to match his Testarossa. As stated earlier, the man had truly ineffable style and impeccable taste.

The good taste continues once you delve into the rest of the collection, which once included a 190SL convertible from Mercedes Benz, and a Lamborghini Miura, which many regard as the most beautiful automobile of all time. Unlike the rest of his cars, the V12 Miura had a particularly unfortunate demise, when Davis crashed the green Lamborghini in 1972. For long it was believed that the musician had fallen asleep at the wheel — a task many would declare impossible in a Miura — but it was later confirmed that Davis attempted to make a right angle turn across three lanes of highway traffic at speed, while under the influence.

"It's always been a gift with me, hearing music the way I do. I don't know where it comes from, it's just there and I don't question it..."
Miles Davis-

In that photography makes a retrospective like such possible, it would be impossible to wrap things up without addressing the photographic efforts of Miles Davis himself. At the Newport Jazz Festival of 1958, Miles was notably photographed with a Leica M3 around his neck, fitted with a selenium meter. According to an article published in Jazz Magazine back in 1976, Davis apparently purchased the camera from the source in Germany and had the store clerk set the aperture and shutter speed — which he never changed 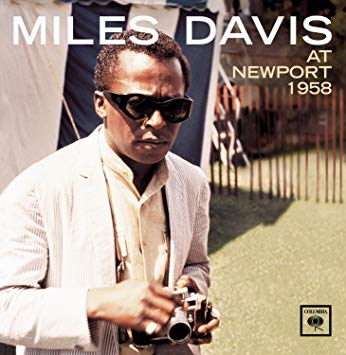 It’s stories like this that illuminate the quirky, larger than life, and tasteful character that Miles Davis was when not creating music. While we can try our best to replicate this man’s legendary style, the old saying about doing so definitely comes to mind. Often imitated, never duplicated. Here’s to Miles!