Are You Buying a Watch or a Story?

In recent years, the popularity of vintage watches has grown immensely. This is partly due to the growth of information about these watches in recent years. Over the past decade there has been a massive surge of websites that are dedicated entirely to watches.

While the best resource to learn about vintage watches was once online forums, the forums have always operated sort of like secret clubs. While the forums can still provide a wealth of knowledge and are a great place to connect with other enthusiasts, you have to know what you’re looking for to navigate them easily. As vintage watches have gone mainstream, the hobby has begged for more mainstream outlets and sites such as our own have cropped up to meet the needs of those seeking an easier introduction into the often overwhelming clubhouse world of watch collecting. The exciting thing is that unlike the forums, many of these sites cover a broad range of subjects relating to the watch world, including the people that make the watch collecting community such a colorful place. The boom in horology-focused websites has made the watch world far more appealing to the uninitiated and anyone with a passing interest in the hobby while also providing an incredible resource for those seeking to educate themselves on vintage watches without wading through thread after thread on forums. 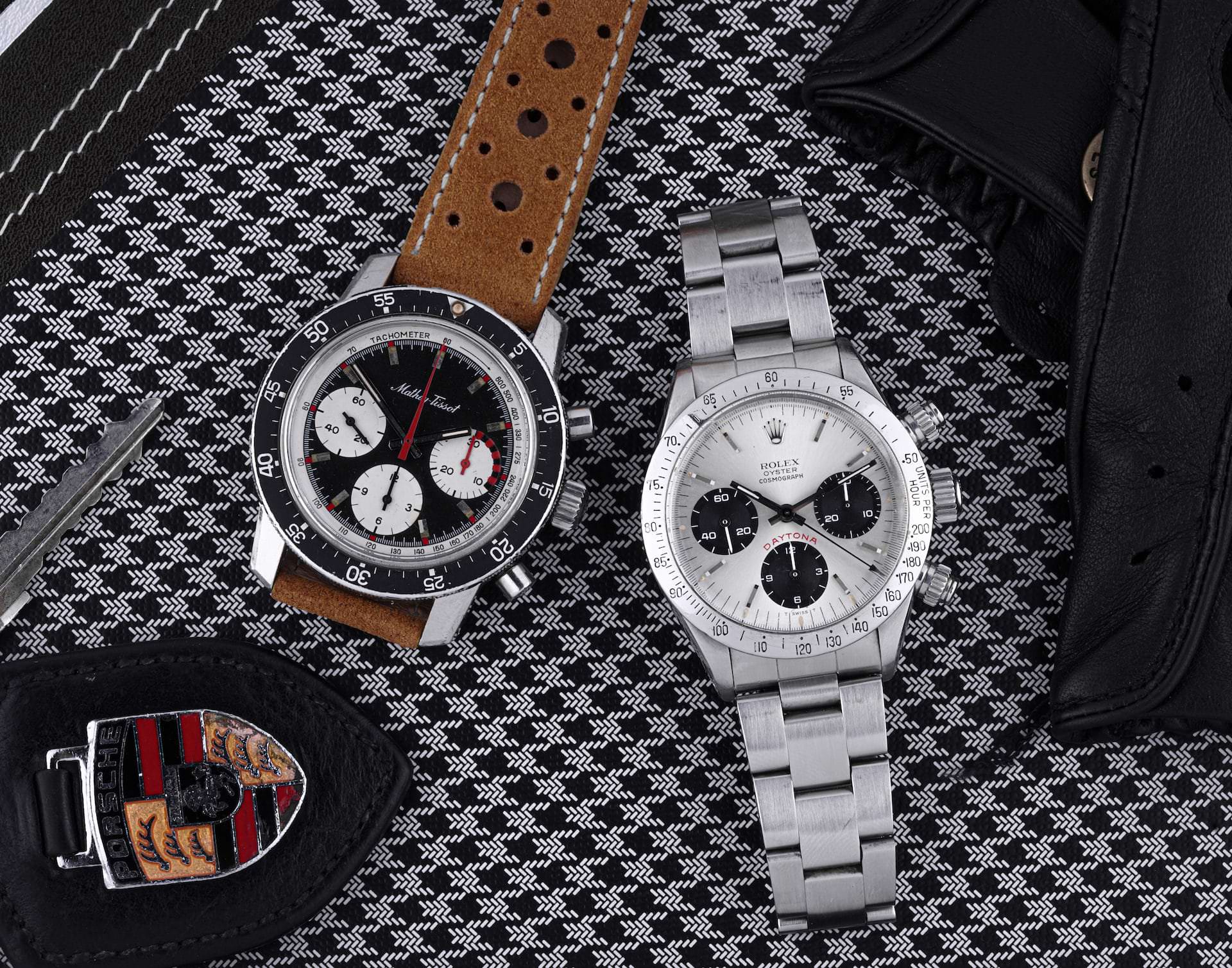 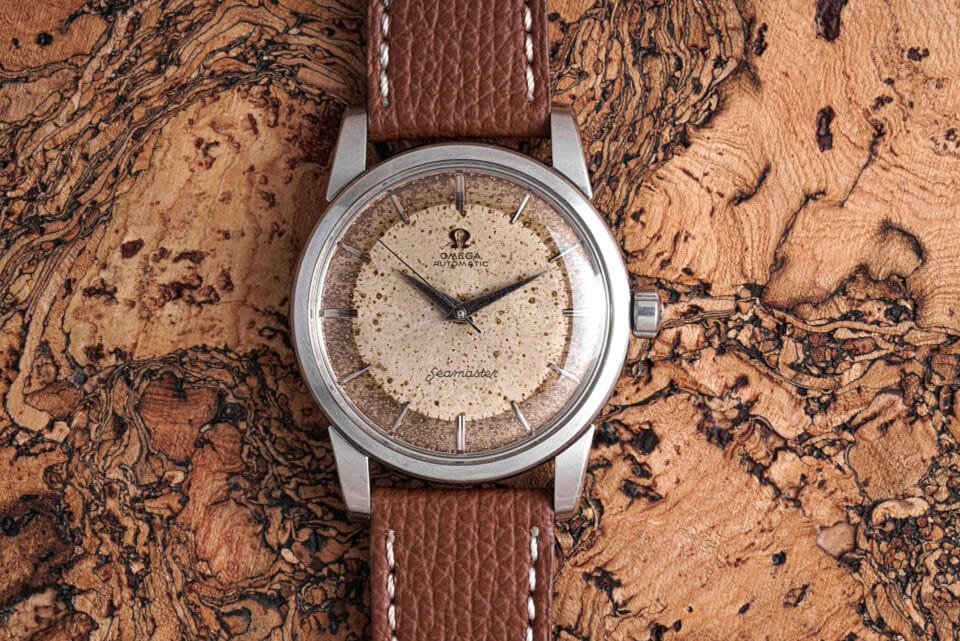 Looking for that vintage vibe? Check out our collection for a number of unique tropical watches. Browse The Collection

A common focus for these sites is the intriguing stories behind the watches that we love, whether that be the stories of the watch’s owner or of a reference’s connection to history. These watches are time capsules with memories carved into them: Memories of adventures and of the special moments that these watches accompanied an owner through. I personally have a watch or two that’s earned a scratch or ding along the way that immediately draws me back into the moment that mark was earned when I look at the watch. It takes time to build up a patina through moments and marks — more time than many are willing to put in. The wonderful thing about vintage watches is they all come with character and history built in. Vintage watches are often said to have “lived a life” and it’s true! When watch collectors fawn over a piece’s patina, it’s not just about the visual appeal, but the mystery and intrigue of the experiences a watch has weathered on the wrists of past owners to earn that patina. Luckily, you can learn a lot about a watch’s history by looking closely at it how it wears the years.

For example, most people don’t think about a watch’s dial immediately when a specific watch is mentioned — but they should! After all, the dial is what one gazes upon most often when a watch is worn and used. And the dial (and how it ages) is one of the key ways vintage watches define their identity. The dial is where a lot of an old watch’s character lives. The materials used in producing dials in the past were unrefined and will often corrode and/or discolor in unique ways as a watch ages. While discoloration and corrosion are major problems that usually devalue vintage items tremendously, when it comes to vintage watches, dials that have aged into different colors (known as “tropical” dials in watch collecting circles) and/or display interesting corrosion patterns typically increase a watch’s value! Not only is a worn-in look desirable from a visual perspective, the different ways individual watches age is what gives them their unique character. You see, the way dials age can differ greatly — even between examples of the same reference that were made right after the other. There are a number of factors that can lead to these differences, but the biggest factor is the environment they have lived their life in.

Let’s imagine we have two Rolex Submariners that are a few serial numbers apart.  After they leave the Rolex factory, they’re whisked away to retailers in opposite parts of the world and go on to live with owners in different climates. These watches will typically age in dramatically different ways — particularly their dials because the life and locations a watch lives in play a major factor in how old dial finishing materials like lume, paint, and enamels age. These effects are particularly extreme when a watch has consistently been exposed to water and sun. So it’s easy to imagine a particularly faded “tropical” dial Rolex Submariner lived its years out on the wrist of a diver in the Caribbean, hopefully exploring the depths of the ocean as it was always meant to. Or perhaps your “tropical” Sub belonged to a sailor that wore it while fighting the waves and swells during a life at sea. While the likely reality is that a “tropical” Sub belonged to someone who had a few too many and passed out on the beach without screwing the crown down all the way, there’s a romantic question mark and mystery that permeates “tropical” dial watches. Whichever way it happened, that “tropical” Submariner’s dial has faded from the inky black it left the factory with to a unique shade of brown or tan for any number of reasons. And this is something collectors go crazy for; you’re not just buying a unique looking watch, you’re buying a wholly unique Submariner as the fading from one “tropical” dial to another will never be quite the same. And what of that watch’s sibling, manufactured just a few serial numbers away, but residing on the other side of the world? Say it’s unearthed decades later in mint condition, it’s black dial as dark as the day it left the factory. How is it possible that the immediate sibling of a “tropical” Submariner can survive the decades to be found in pristine condition? Perhaps it was worn only on special occasions? Maybe it was a beloved gift that that owner cared for and babied as a prized possession. There’s romance in that story as well and collectors have carte blanche to choose their own adventure — finances permitting. But even taking care of and properly maintaining a watch can cause it to accrue some patina.

The lion’s share of wear and damage sustained by vintage watch’s is to the case. I’ve always said that a watch is not truly yours until it’s taken that one big knock which makes your heart skip a beat — a classic “oh shit!” moment. But over time any watch that’s enjoyed and worn, even carefully, will get knocked, nicked, scratched, and dented. All of this adds to a  watch’s character and there’s no shame in honest wear. However, there’s a difference between honest wear and abuse, but it’s usually pretty easy to tell what kind of life a watch has led by the scars its case bears. The case of an office worker’s daily-worn watch will look vastly different to that of a mountain climber or mechanic. Much like a good leather jacket, watches generally look better with age — after all, they’re tools and they were meant to be used. This is why most collectors find vintage watches so appealing.

There is certainly a discussion to be had on whether or not an inscription counts as patina, but these personalizations are a prime way watches tell us their stories. Engravings on a watch’s case back are a direct way of telling us of the life it has lived. Was it a retirement gift to someone that has devoted their entire career to a company? Perhaps it’s a graduation gift that someone received, a coming of age gift as they entered a world where time really is precious? Maybe it was an engagement present given to them by the person the owner has shared their life with? All we can do in most cases is imagine the circumstances that led a watch from its past life to your wrist. I recently had the good fortune to attend a Horological Society of New York lecture about how the role history plays in our love of timepieces. The presentation, by Cole Pennington, covered his unique, often exhaustive method of uncovering the personal histories of some of the timepieces that have entered his life. Pennington works tirelessly to piece together a watch’s ownership history and to retrace the path it took in coming into his possession. It was a lecture I will not soon forget. 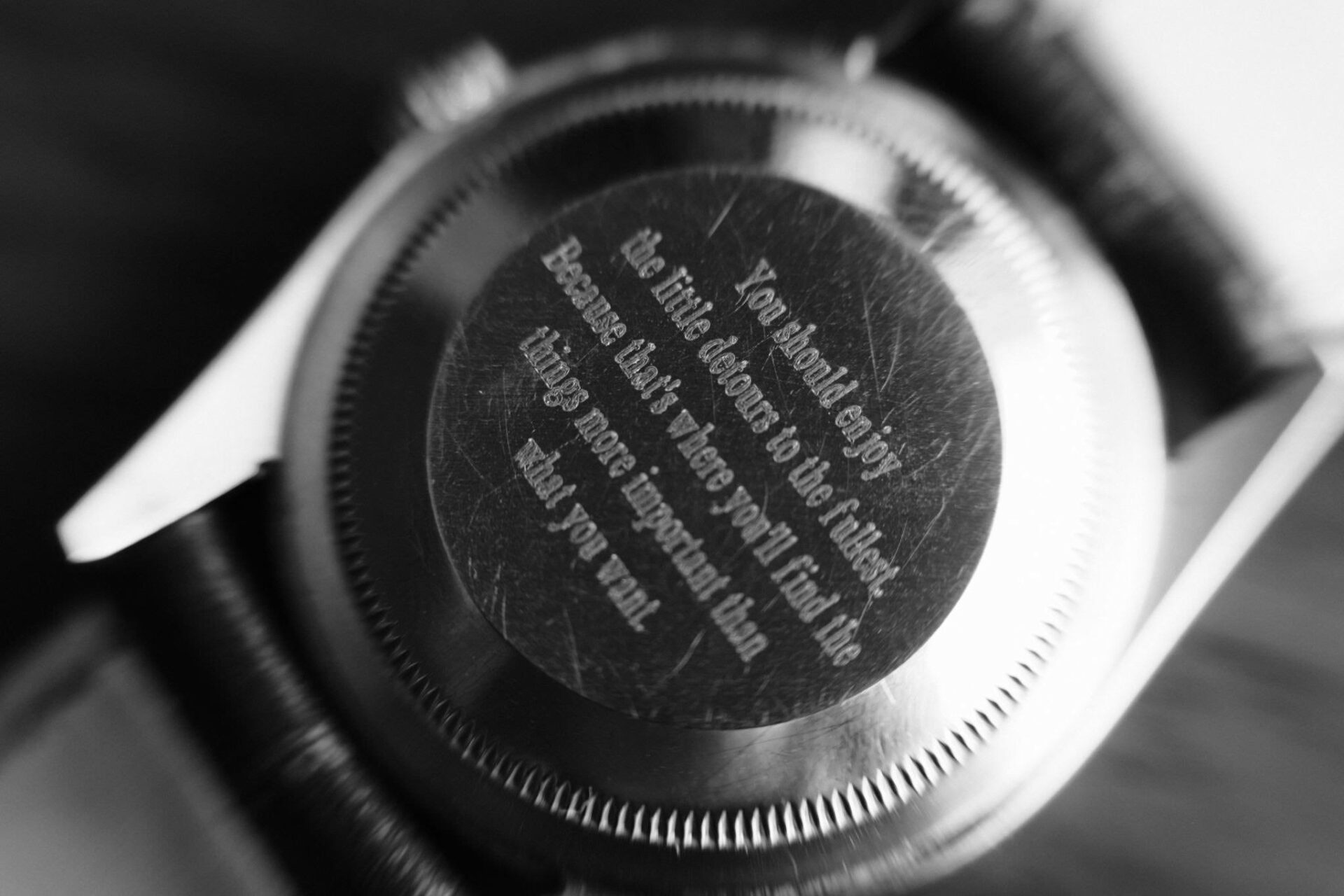 Tell Your Story The caseback on the authors Rolex Explorer 114270

Our watches will most likely outlive us and we become a part of that timepiece’s personal history whether we engrave the caseback or not, but it’s a novel way to let a watch’s future owners know it was loved.

The question remains, when you buy a vintage watch, is it because you love the watch itself or is it the story it tells? Is it the mystery it holds? A life lived on the wrist is the fundamental difference between buying vintage and buying a modern watch. The choice is whether or not you want to add your own chapter to the story, or do you want to begin the tale yourself? Either way, every watch will be vintage someday.

Christian Amato is an engineer, photographer, and watch enthusiast. When he’s not reading or writing about the world of horology, you can usually find him going on photo walks, working on servers, or exploring thrift shops.