In 1982, before trans-global motorcycle journeys were televised for the masses, before the internet and smartphones put a GPS-tracking device in everyone’s pocket, and before motorcycle culture truly went mainstream, few men were willing to lay it all on the line and tackle such a harrowing adventure – especially solo. And considering the unfortunate societal norms of the time, it was entirely unheard of for a woman to attempt such a thing. That is until Elspeth Beard.

In a time when it was already highly unusual for women to even ride or repair motorcycles at all, Elspeth Beard not only carved her name into the history books by blazing her own trail, but was almost entirely self-sufficient throughout the entire duration of what proved to be a perilous two year peregrination.

The story of Elspeth Beard’s trans-global bike tour initially came to me via my brother, who has an uncanny knack for finding out about historically important (or otherwise interesting) undertakings where watches were involved. Between the bit of horological intrigue in Beard’s quest and her willingness to share photographs and anecdotes from that trip, her’s is a story that I’m eager to tell. As with the majority of stories I cover, the watch that accompanied Elspeth around the world is but a single (albeit intriguing) thread within an intricate tapestry and a much bigger picture – a picture that tells the story of a gritty young woman from England that had the gumption to literally take on the world.

In the early 1980s, Beard spent a considerable amount of seat-time on her 1974 BMW R 60/6 – a motorbike well-loved by enthusiasts – powered by a two-cylinder boxer-style engine. In fact, Beard enjoyed the bike so much that she clocked over 10,000 miles on it within the first two years of ownership alone! For the modern equivalent of $1800, Beard had invested a great deal of money into her prized BMW and was clearly determined to get a solid return on her investment, and what better way to milk those miles than to traverse the globe on two wheels?

At the time, Beard was tending bar to raise funds for the epic adventure she was planning on undertaking, and she wholly dedicated herself to learning the mechanics and intricacies of her trusty BMW R 60/6 in and out between shifts. By the time Beard was ready to start the trip, she was capable of tearing down and rebuilding the entire bike on her own, and became mechanically adept enough to tackle any mechanical or electrical issue that might arise while alone on the road in some exotic land.

Preparation for the trip meant sourcing a watch that fit the specific criteria necessary for a ‘round the world motorbike expedition in 1982. What might those requirements be? According to Beard, the watch being water resistant was of paramount concern; in the event of rain, swimming, and showering, the watch had to be able to remain on-wrist and unharmed. Wearing the watch for the entirety of the trip also greatly reduced the likelihood of theft, which proved to be a real threat throughout her travels. Additionally, the watch had to be powered by an automatic movement in order to ensure that there was no need for a battery change mid-trek. For Beard, the right timepiece came in the form of a Seiko 4205-0140, which was manufactured in June, 1982 – just four months before her trip began. This 34mm black-dial dive watch was rated to 150m of water resistance and featured one of Seiko’s famously reliable automatic movements, making it ideally suited for the rigors ahead.

While Beard has no specific recollection of actually purchasing the Seiko, she’s quick to point out that the Japanese diver did all that she asked of it throughout the trip. Surprisingly, Beard says that time itself was less of a concern on the road than knowing the date. Where a general concept of “time of day” was determined by sunrise and sunset, there were certain date-specific appointments that absolutely had to be met. From snorkeling the Great Barrier Reef to visiting Everest base camp and Annapurna Pass, this unassuming little Seiko diver saw more in two years on Elspeth Beard’s wrist than many humans see in a lifetime.

Beard’s walkabout began in New York City. The first leg of the journey saw Beard ship her beloved bike to the US and then traveling north from NYC to Canada, then south to Mexico, then north again to Los Angeles. From Los Angeles, Beard shipped her trusty BMW to Sydney, Australia and took a brief detour to New Zealand to explore on foot before reconnecting with the BMW in Australia.

After Beard arrived in Sydney, she was convinced to build a lockable storage system for her bike by a fellow overlander. The large storage box sat proudly upon the back of her well-traveled little German bike and was crafted from aluminum. The choice of aluminum resulted in a relatively lightweight solution that could easily be fixed on-the-fly with a rivet gun – something easily found in most countries. An unfortunate incident with a pothole in Queensland catapulted Beard from the BMW’s saddle to her first injury of the trip: A concussion that resulted in a two week hospitalization. However, undaunted by the trauma and time lost, Beard had the BMW shipped to Singapore while she explored Indonesia. What did we say about grit again? 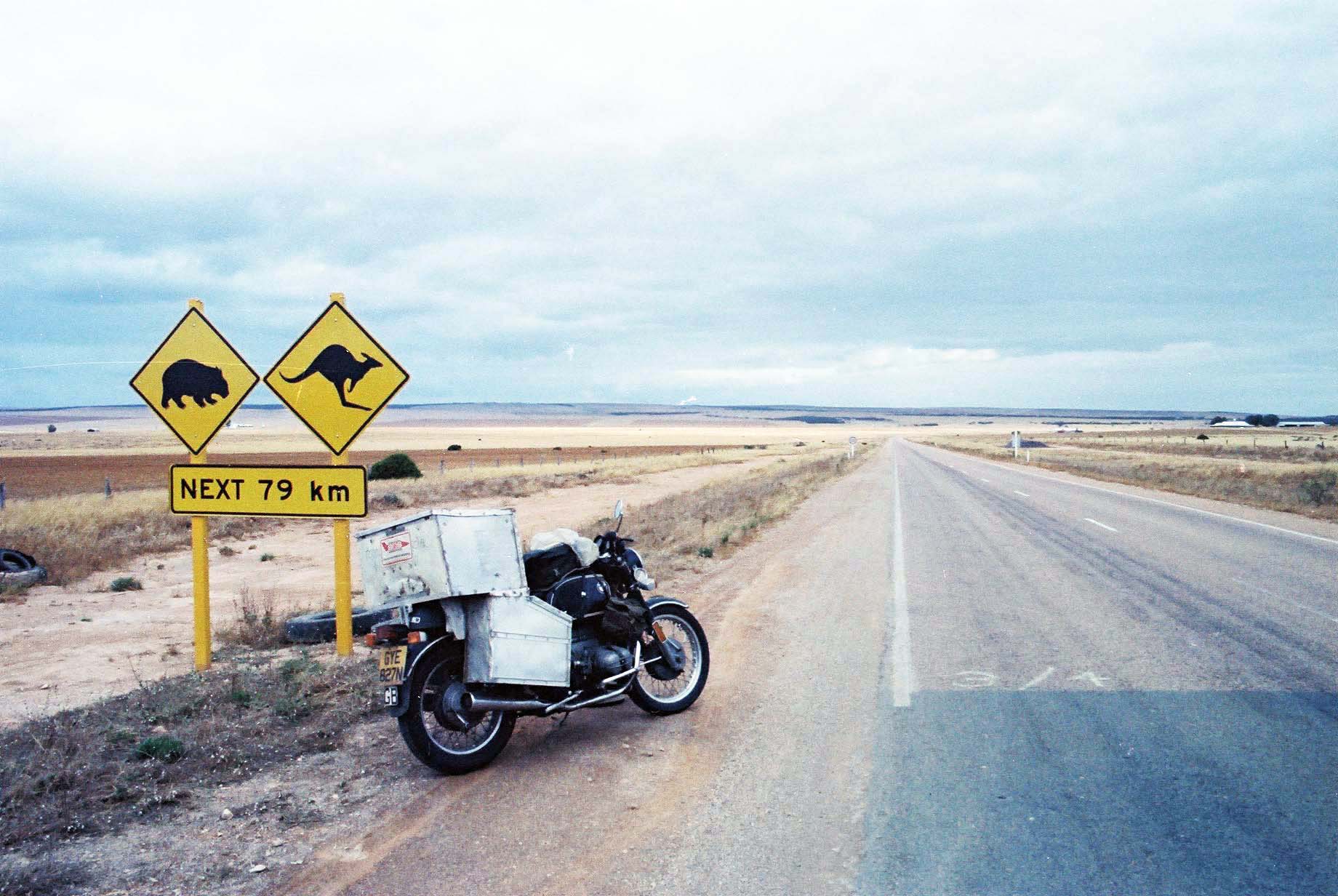 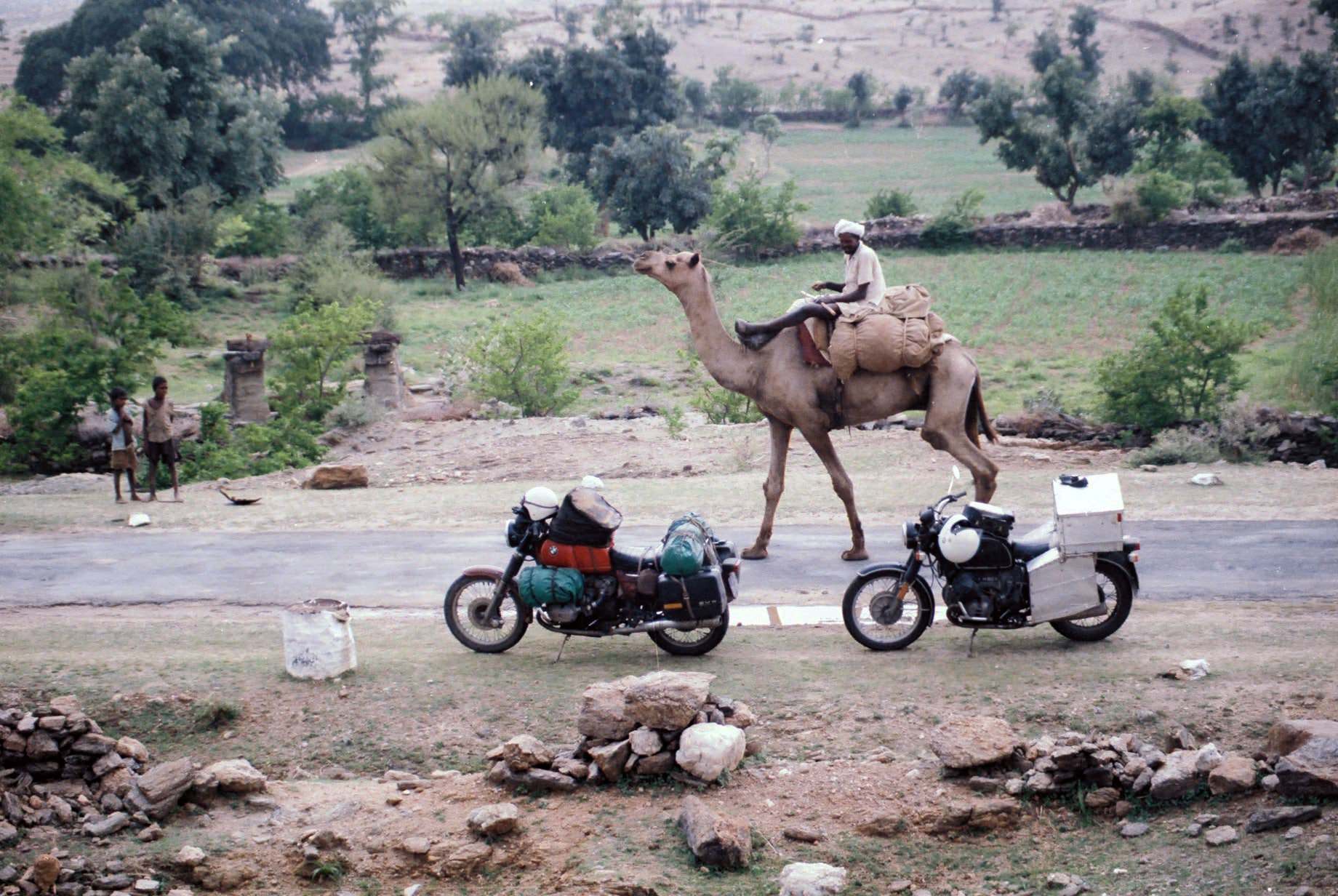 The concern of theft mentioned earlier was in fact very real and as fate would have it, Beard’s luck would be tested again – this time in Singapore. All of Beard’s belongings –  including her passport, travel visas, and motorcycle registration – were pilfered, leading to a six week delay while these critical documents were replaced. And to make matters worse, while traveling south to place the bike on a boat headed from Penang to Madras, Beard was involved in accident number two. While following a truck, a dog ran out from behind and sadly got caught under the wheels of Beard’s BMW. This canine catastrophe caused both Elspeth and her trusty bike to collide with a tree. Miraculously, she and the BMW both proved to be unbelievably tough, and after a short recovery and a bit of bike fettling, they were on the road again – this time headed to India.

From Calcutta to Kathmandu, Elspeth Beard explored most of India alone – though she was able to meet up with her parents (who had traveled from England) for the first time in two years! Beard then crossed the border into Pakistan, followed by an exploration of post-revolution Iran. According to Beard, she kept her well-worn Bell helmet on at virtually all times in Iran to serve as a surrogate burka. Unfortunately, Beard fell ill with hepatitis at this point, however, she managed to cross the expanse of Iran in under seven days despite the ailment! In Eastern Turkey, Beard spent several weeks regaining her strength and tending to her bike, which needed a bit of work to finish the arduous trip through Greece and back through Europe. 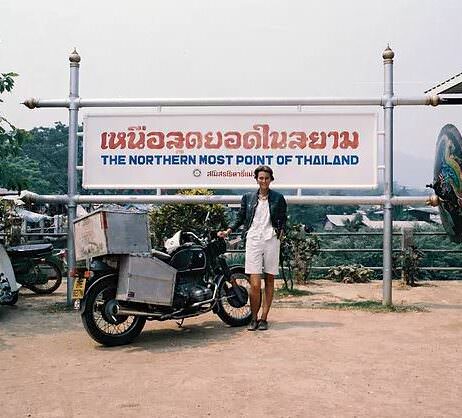 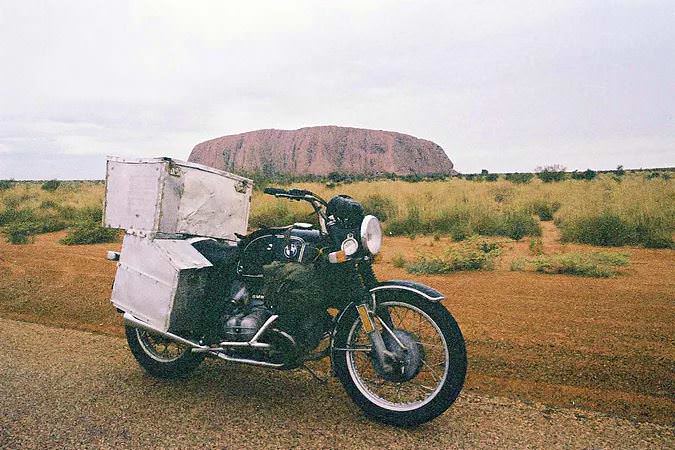 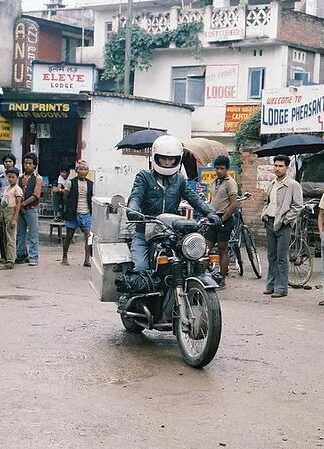 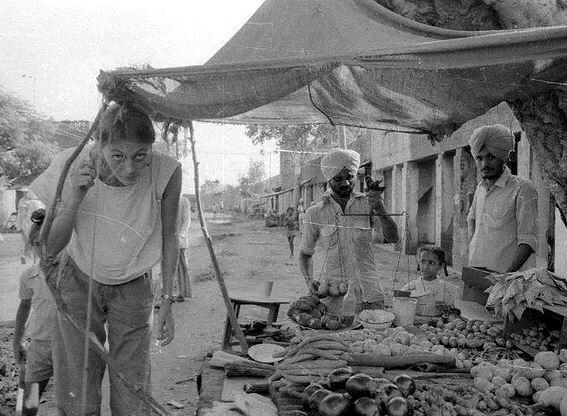 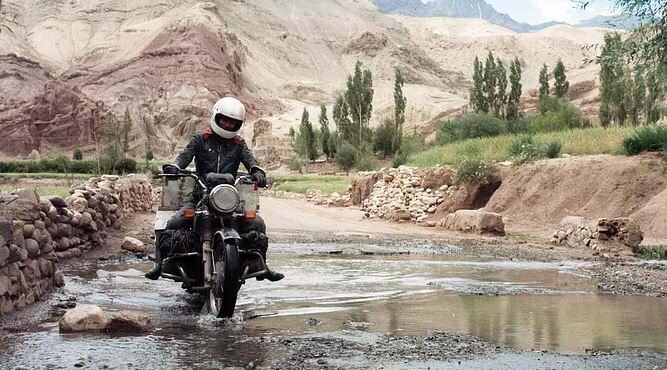 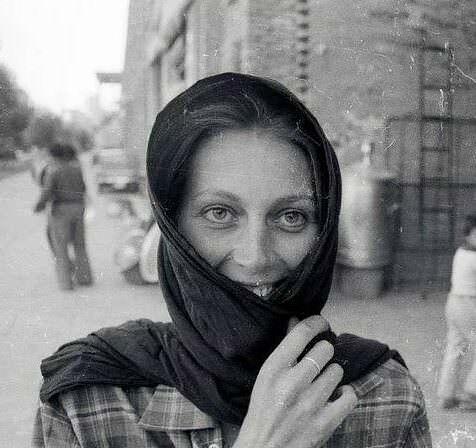 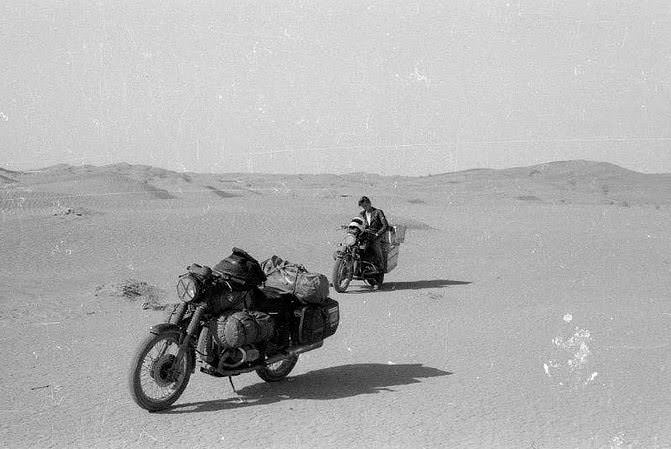 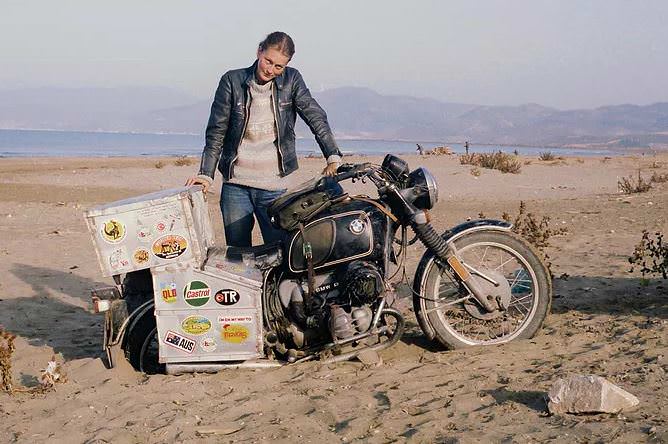 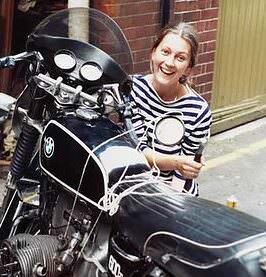 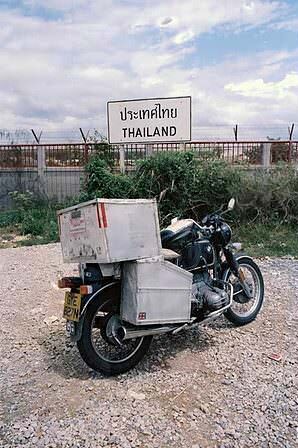 In the span of just over two years, Elspeth Beard and her BMW accomplished a great deal – not just from the perspective of personal adventure and enrichment, but in completing a feat that I believe is grossly underappreciated now, and certainly was at the time! Elspeth Beard logged over 35,000 miles and in doing so, displayed a rare kind of unflappable courage in the face of adversity. Her level of resolve was immense, inspiring, and uncommon, and the truth is no obstacle, incident, or health concern proved too much to overcome. Be it theft, illness, injury, mechanical failure, blistering heat, hypothermic cold, or the constant tugging awareness of being a young woman traveling solo through unknown, exotic, and sometimes unfriendly locales, Elspeth Beard remained steadfast and unfazed. And while that trusty Seiko wristwatch is but a small detail from her compelling tale, one cannot help but think there is no better timepiece to have made the journey on Beard’s wrist. Seiko divers are durable, capable, and a tangible representation of the “form before function” mentality, which is why these watches have appeared throughout history on the wrists of soldiers, astronauts, Antarctic scientists, and even trailblazing overland motorcyclists. 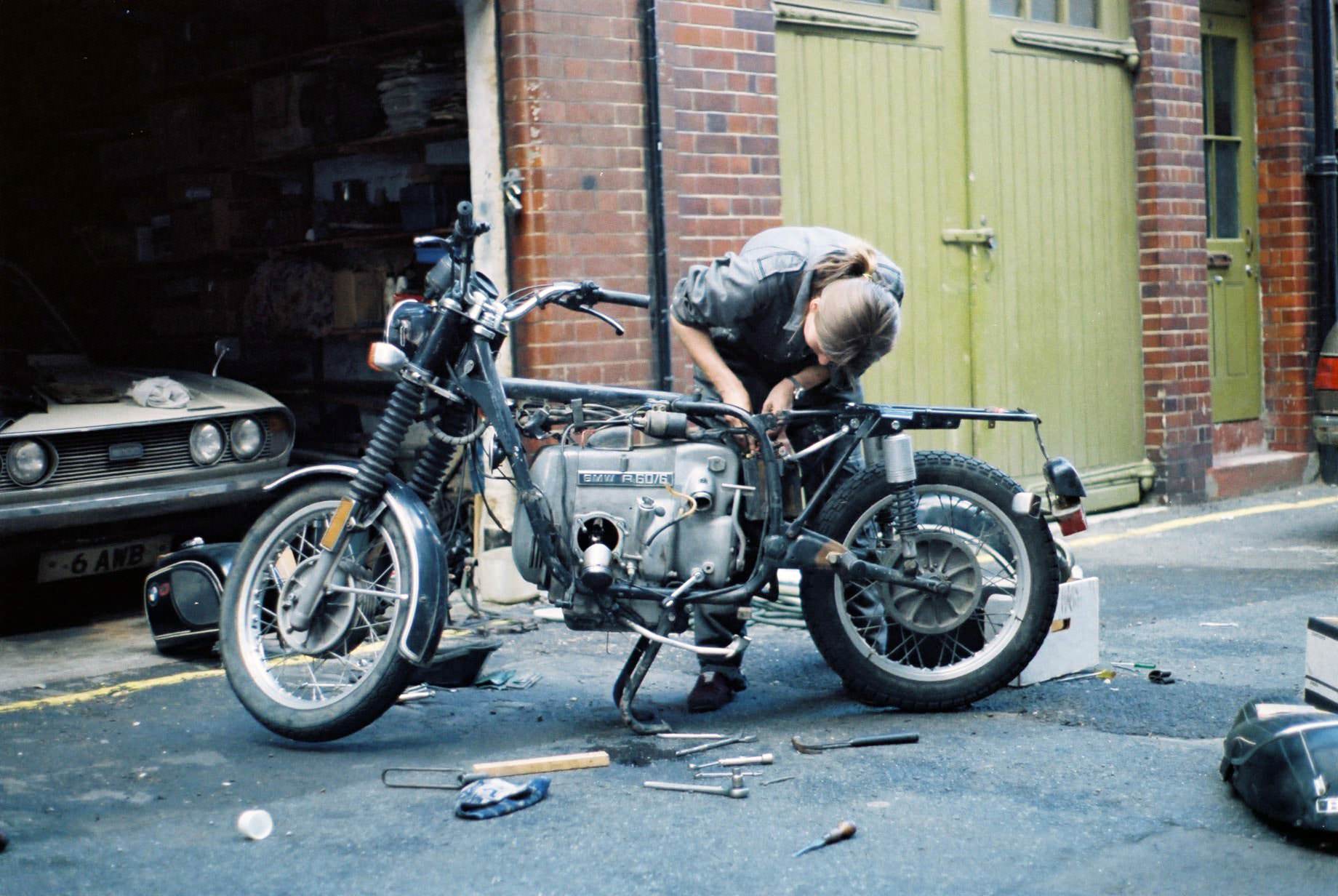 I want to thank Elspeth for her time and willingness to share details regarding this incredible pursuit. If you enjoyed the article and would like to learn more about this fascinating odyssey, check out Elspeth’s website and pick up her book Lone Rider: The First British Woman to Motorcycle Around the World.

Justin Couture is a writer, husband, and dog-dad extraordinaire. He runs TheWristorian, which focuses on lesser-hyped watch models and the history around them. Outside of horological pursuits, Justin can generally be found spending time with his family, fishing, and catching a nap with his Cavalier Spaniel, Henson, whenever possible.

Previous Post The Hunt Valley 911 Carrera: The Fruition of a Childhood Dream
Next Post A 1951 Longines Automatic ref. 625C 2