The Hunt Valley 911 Carrera: The Fruition of a Childhood Dream

There was never a point in Drew Lieberman’s life when he wasn’t obsessing over cars. As a kid, Drew would frequently beg his father to take him to visit the local exotics dealerships or to drop into a nearby shop that specialized in British classics.

While the  young Lieberman’s dad did plenty to foster his son’s nascent passion for autos, things were ultimately thrown into high gear by his uncle Jeffrey, who had filled a family barn with a robust collection of classic cars and neon signs.

“Whenever I visited my uncle, I would help hang his most recent porcelain sign acquisition. As a reward, he’d let me choose a car from the garage and we’d go for a drive to get snowballs (a Maryland-specific take on shaved ice). I always chose a Porsche.”

Lieberman’s uncle was sure to keep his nephew stocked up with the latest classic and exotic car catalogs and magazines and would often send him home with a fresh copy of the latest duPont REGISTRY.

“Being dyslexic, I would just pour over each page cover to cover and stare at the images of the cars for sale for hours.”

Lieberman’s first experiences behind the wheel saw him cruising around town in a ’97 Land Rover Defender D90, a killer bit of machinery for anyone, but Drew Lieberman was 14 years old at the time. And while he’s quick to admit that it was irresponsible to be driving so young (and illegally), Lieberman credits his preoccupation with cars with “probably keeping him out of a lot of trouble.”

Several of Lieberman’s friends and relatives were also auto enthusiasts and heavily involved in the tight-knit Maryland automotive scene. One community event began as a casual Sunday morning coffee ritual, but eventually blossomed into a 1,000 vehicle event called the Hunt Valley Car Show, and it was at those shows that Lieberman’s imagination was snared by one car in particular: A 1985 Porsche 911 3.2 Carrera. 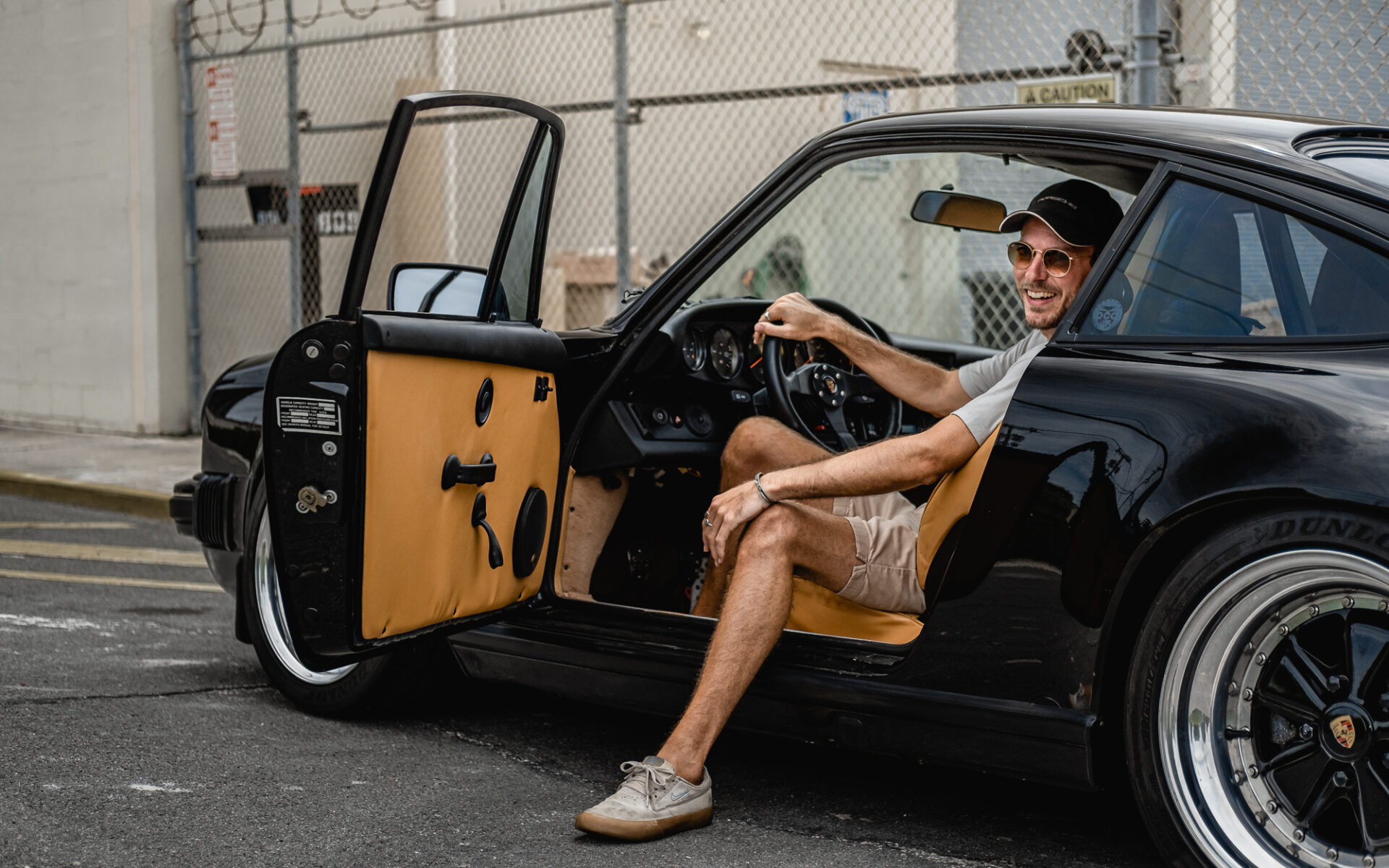 “I was small for my age and had an annoyingly high-pitched voice. I would pester that Porsche’s poor owner constantly, just asking him all kinds of questions about it or to sit in it. Something about those yellow headlamps really ingrained the car into my mind. It became mythical to me.”

The “whale tail” Carrera was initially delivered in France. In 1985, a post-war decree calling for amber lenses on all French cars was still in effect; it was favored by locals for the golden beams’ effectiveness in the fog and the lack of dazzling effect the tinted lights had on oncoming traffic. Eventually, an American buyer brought the 911 to the US and had the good taste to preserve the car’s uniquely European appearance. Decades later, the Porsche found its way to Hunt Valley, where the young Lieberman fell under its spell.

I would pester that Porsche’s poor owner constantly, just asking him all kinds of questions about it or to sit in it. Something about those yellow headlamps really ingrained the car into my mind. It became mythical to me.

Upon graduating, Lieberman moved to St. Petersburg, Florida to study marine biology and business management at Eckerd. Ultimately, Drew found he wasn’t well-suited to the world of higher education and left Eckerd for Florida’s east coast, where he dove headfirst into the workforce.

“I never imagined that I’d get into the car business, but in hindsight, all of the pieces were already there and it isn’t surprising that they came together eventually. I was just eager to get my foot in the door at that point.”

“I picked up all of the hands-on labor that was needed – really anything shy of proper mechanical repair work.”

After his time at the museum, Lieberman transitioned into modern luxury auto sales and at this point, he was commuting in a 1970 Triumph TR6. On one of his morning drives to work, he spotted an Alfa Romeo GTV stranded on the side of the road.

“In true Italian fashion, the Alfa’s fuel gauge had broken and the driver ran out of gas. I stopped and offered him a lift to a station and we immediately hit it off – mostly chatting about rally racing.”

Struck by Lieberman’s passion and knowledge beyond his years, the Alfa’s owner invited Drew back to his garage and proprietorship in Boynton Beach: Milestone Motorcars. Lieberman was stunned to be confronted by a collection of Ferraris.

Despite working with Italian exotics, Lieberman never shook the itch for a classic Porsche 911. While he had dabbled in later Porsche models, he always adored the quirks of rear-mounted, air-cooled motors and a narrow chassis. And for the first time in his life, he was making enough money to start a rainy day fund, which inspired him to start  browsing car listings again, often for hours at a time – not unlike those early days spent drooling over the duPont REGISTRY.

The stars eventually aligned: Lieberman came across an ad for a mid-’80s 911 with Frenched headlights and other Euro-spec appointments while surfing the classics listings and immediately began exchanging messages with the seller. After the typical mundanities, like maintenance history and modifications, were discussed and the conversation went further, Lieberman was struck by the car’s uncanny familiarity. But there are plenty of ‘80s 911s out there and modifying them to sport yellow headlamps isn’t an unheard of touch, if unique. Still, Lieberman couldn’t shake the feeling that he knew the car, and requested a phone call with the seller.

“I told the seller I had one final, decisive question, then asked if he had brought the Porsche to any car shows in Hunt Valley in the past.”

“I asked if he recalled being pestered by a skinny, annoying kid.”

“It was a real goosebumps moment. I just told him ‘that kid was me!’ At that point I had to have the car. No matter what the cost, nor how far it was, there was no turning back.”

Lieberman still had Porsche-aligned connections in Maryland and had his friends there inspect the car, confirming beyond any doubt the French import from his youth, and transportation directly to the Milestone shop was arranged.

“It was a struggle to afford at first, but now it’s my savings account — my enjoyment machine. It still needs little touches. I’d like to get the signals working, but I’ve been too busy enjoying it. I use it for shop errands, for grocery and laundry runs; it’s my everything car. And that’s also why I love Porsches; they’re utilitarian, yet track-ready — and much less pretentious than the other marques they compete with. No one uses an ’85 Ferrari as their errand runner.” 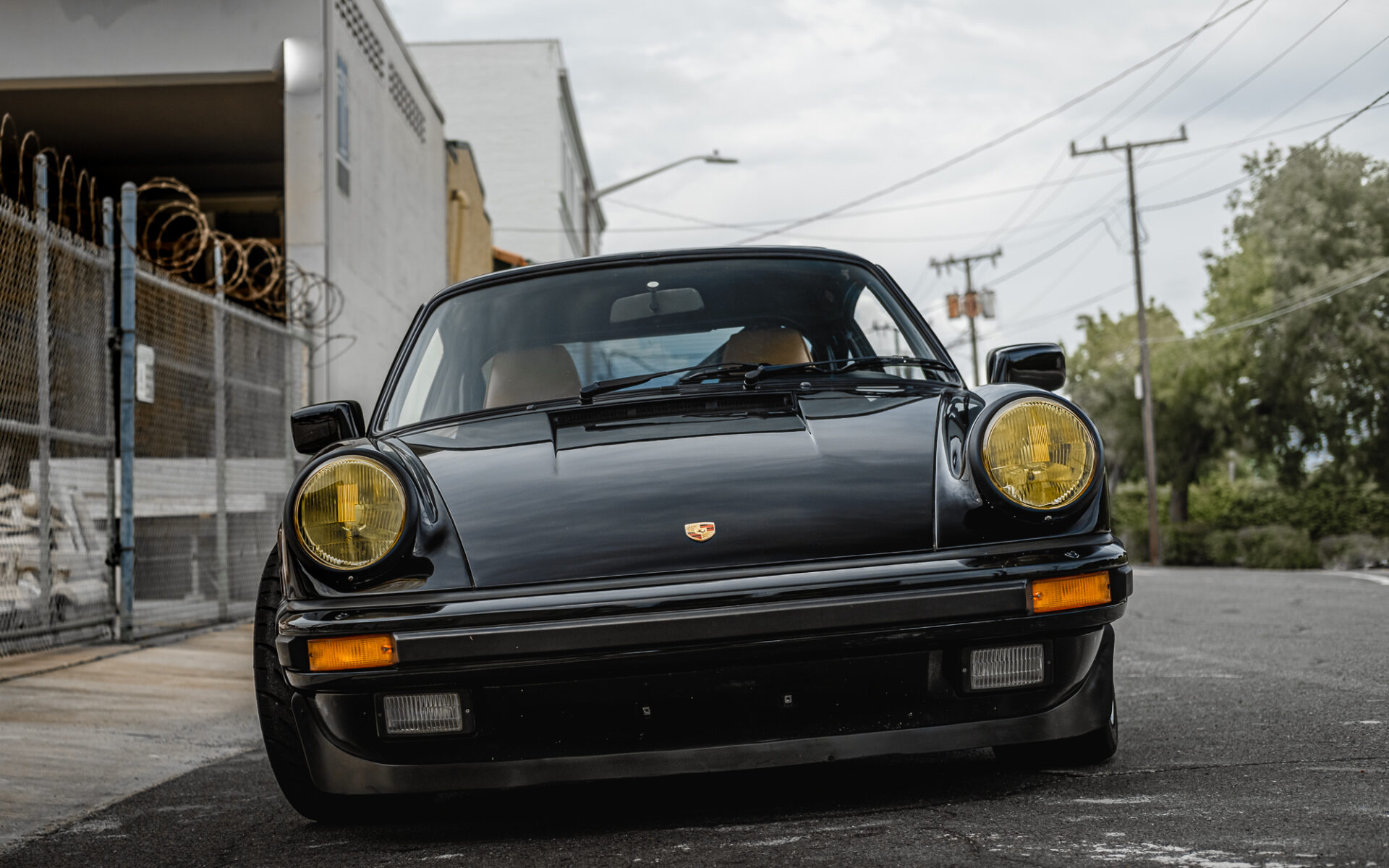 In addition to the yellow-lensed H4 headlamps, the 911 boasts other Euro-spec touches including the reduced-sized rear “bumperettes,” side marker lamps, and black reflector covers on the front bumper. Due to not having to meet US smog requirements, European spec 911s produced more power off the assembly line.

Lieberman explains “The compression is higher: 10.1-to-1 and the cam timing is also slightly different, as is the gearing ratio. And because the engine is rigid-mounted, you really get to feel every rev in the seat of your pants.”

In Leiberman’s care, the 911’s attractive champagne leather interior has been re-dyed, but is the original material and remarkably has virtually no rips or tears. An OEM dash replaced the original one, which cracked the way many of these do, and RS-style door cards have been installed to complete the “factory hot-rod” appearance, and the car received a top-notch, windows-out repaint in its original black (paint code A2). It does have some modifications and sports a set of  17” Lindsey P3 Fuchs-styled wheels, which are custom made utilizing a BBS barrel with a factory-original Fuchs center to retain a bit of the classic 1980s appearance, but offer a more aggressive overall look and feel. The wheels are a staggered setup with an 8” width up front and 9.5” rears. The 911’s brakes have been upgraded to 4-piston units from a Boxster in the front and have larger-diameter stainless steel brake lines. To manage temperatures, a racing brake duct cooling system has been added.

Out back, the engine was treated to a case-apart rebuild at around 76,000 miles, with a transmission rebuild done shortly after. All synchros were replaced, a Sachs sport clutch with an aluminum pressure plate, a Stomski Racing shift coupler, and a Seine System gate shift kit were installed. Weltmeister shift bushings were added as were a factory short shifter. And the car’s original Euro-only transmission oil cooler remains intact and functional! The 911 sings through a B&B dual-outlet sport muffler mated to a Fabspeed cat bypass.

For Leiberman, the car’s unique driving experience is unparalleled. He says “This car drives very differently from a stock example, primarily due to the suspension modifications. You truly feel everything, which is a blessing and a curse — but overall I love how planted this car feels.” 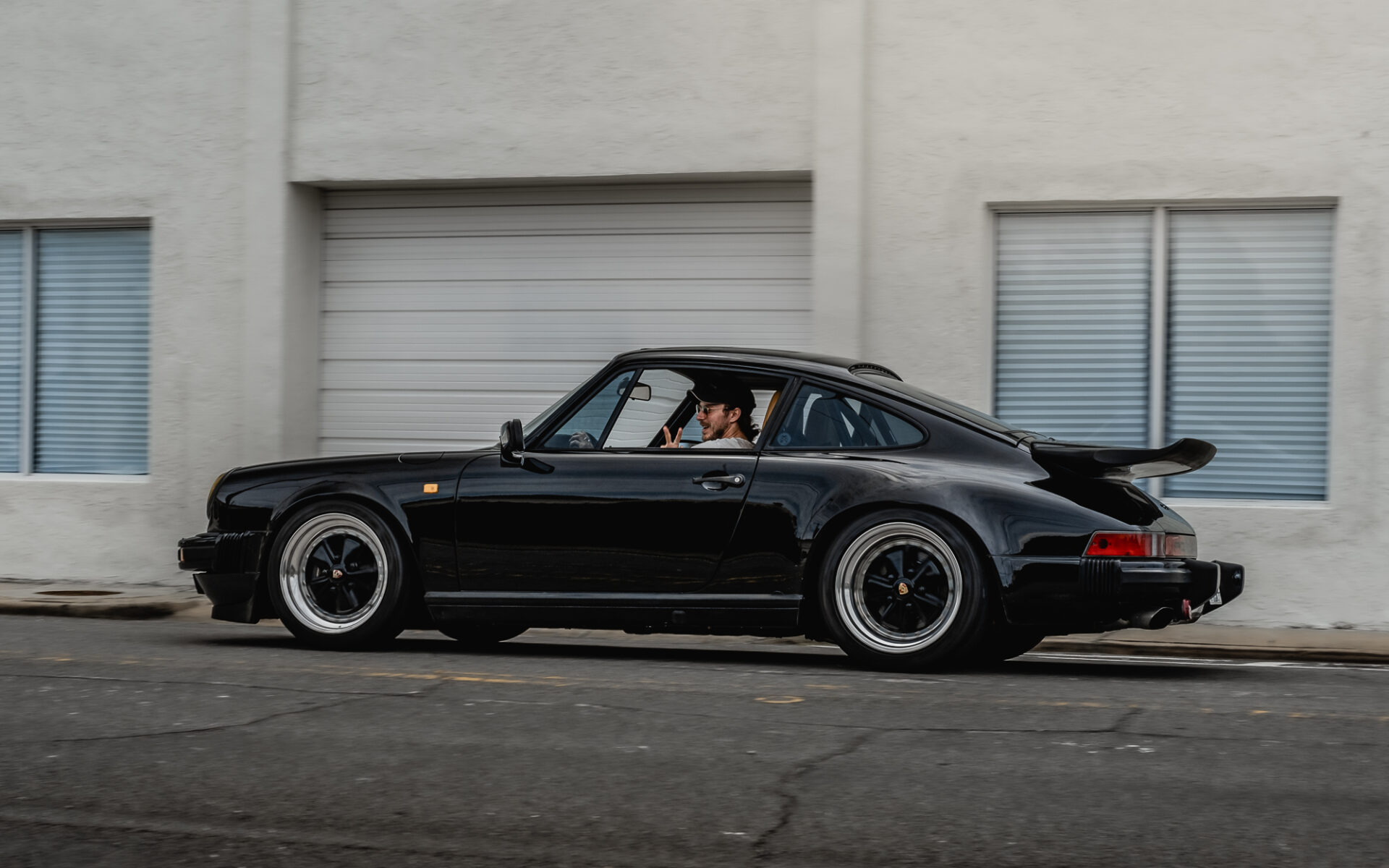 “Because I knew that I would be driving this car all the time, I changed the camber setup for more street use to save the tires from getting shredded too quickly and raised the overall ride height by .75 inches. This setup ticks every box for me, and I love the feeling of utilizing a race setup on the street, and don’t plan on changing a thing for as long as my back can handle it!”

The Carrera draws attention from a multitude of folks — from children to old-timers, collectors to tradesmen. Its appeal is immediate and something that doesn’t seem to take much explanation.

“I bought this car for myself. But when other people see it and get a smile on their faces — I just love that. Sometimes I still can’t believe that I own my childhood dream car. I’ll leave a restaurant and see it parked at the curb, and every day is a fresh reminder. My father teases me for staring at the Porsche every time I park it, but I can’t help it — it’s kinetic art.”

Vincent Conti is a South Florida-based writer, photographer, and motoring enthusiast who has spent over a decade in the automotive and motorcycle industry. He owns, maintains, and obsesses over vintage BMWs of both the two and four wheeled varieties.