The Deep, Dark Details of the Rolex Explorer II

A lume plot every 2 and a half minutes, a brushed stainless-steel bezel, a non-mercedes hour hand, a flat out strange fourth hand, and a cream-colored dial— all, at one point, characteristics of the Rolex Explorer II.

Even after the introduction of Submariners with cute blue and green bezels, no product line in the world of Rolex sport has the range of the Explorer II. Ok, the Daytona has some real variation, but isn’t that a whole different category?

The Explorer II has long been considered the little brother to the brand’s Submariner, GMT, and Explorer models. The vintage market is starting to really flip that convention on its head. Where 5512s, 1675s, and 1016s have found level since the recent Rolex sport boom, the Explorer II’s reference 1655, 16550, and 16570 have sailed along, generating more and more interest by the month it seems. Here is all you need to know if you have your eyes set on one of these truly great Rolexes. 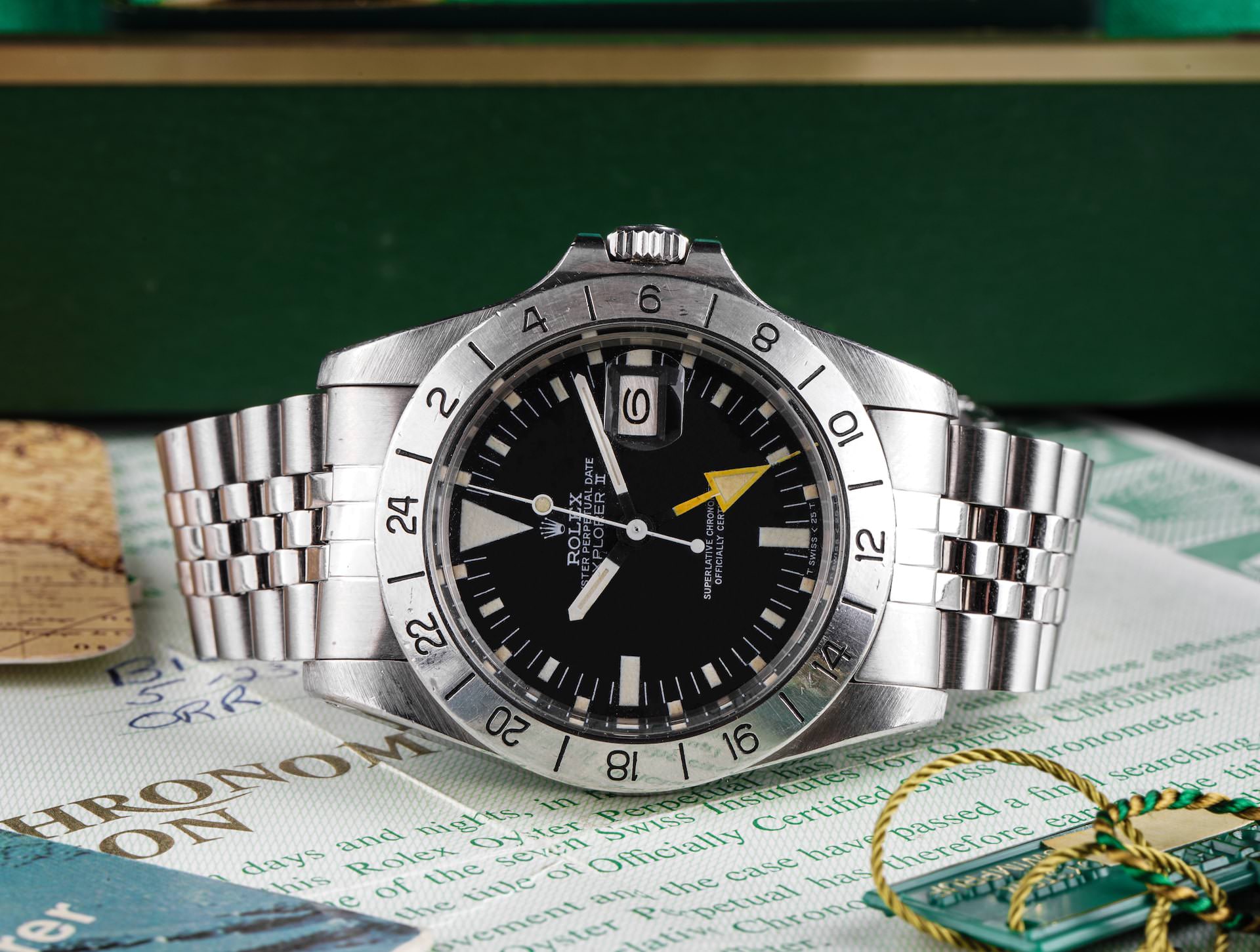 Ah yes, the ‘Steve McQueen Rolex’ that really has nothing much at all to do with Steve McQueen the man. A tale nearly beat to death in the vintage Rolex community, the “King of Cool” actually reigned in a Rolex Submariner that may have been falsely identified as a first-generation Explorer II somewhere along the way.

McQueen provenance or not, the reference 1655 is an icon thanks, largely, to its unique look and relative rarity. Developed in the long-ago era where watches were designed for real use, this Explorer II was made for speleologists— those who dive in and study caves. Often mistaken for a GMT function, this watch’s fourth hand is simply a 24 hour hand and its bezel is fixed. The lume plots every 2.5 minutes can also be read as hour markers in our 24 hour day along with that fourth hand’s chunky lume. Nowhere else in the history of Rolex can you find a watch quite like this. Although useful in other applications, the specific use case and bold looks led to poor sales and, now, rarity versus other Rolex models of the era.

If in the market for an example, look no further than Revolution Watch’s breakdown of what details you should expect when it comes to the reference’s 5 dial variants, 4 slightly different bezels, and 2 second hands.

This ‘transitional’ Explorer II is one of the hottest watches in the vintage Rolex market of 2020 in one form and remains a tremendous value in another. Given the short timeline we, again, have some rarity here— as much as that word can be used when speaking to Rolex.

This second iteration featured a new movement, the Rolex caliber 3085— a significant upgrade. With this caliber, the Explorer II became a true GMT watch with independent control of its fourth hand additionally adding a quick-set date function and a hacking seconds hand.

Aesthetically, the changes were a bit more obvious. The ref. 16550 moved toward the rest of the brand’s sport lineup in its design, swapped those funky hands of its old brother for a set mirroring the Rolex GMT-Master II— introduced the same year in 1985— and was offered with both a black and white dial. What the model lost in the funk of the first Explorer II is made up for in differentiation from the rest of the sport catalog of the time.

As more attention has been called to the five-digit era of Rolex, the so-called ‘panna’ cream dialed ref. 16550s are really coming into their own. Taking nothing away from the most renowned second-generation Explorer IIs, other examples, be it in black dial executions or even more polar white dials, remain a tremendous value. An observation on these, Rolex’s lume mix in this period has a high propensity to age into that deep yellow that vintage fans adore. 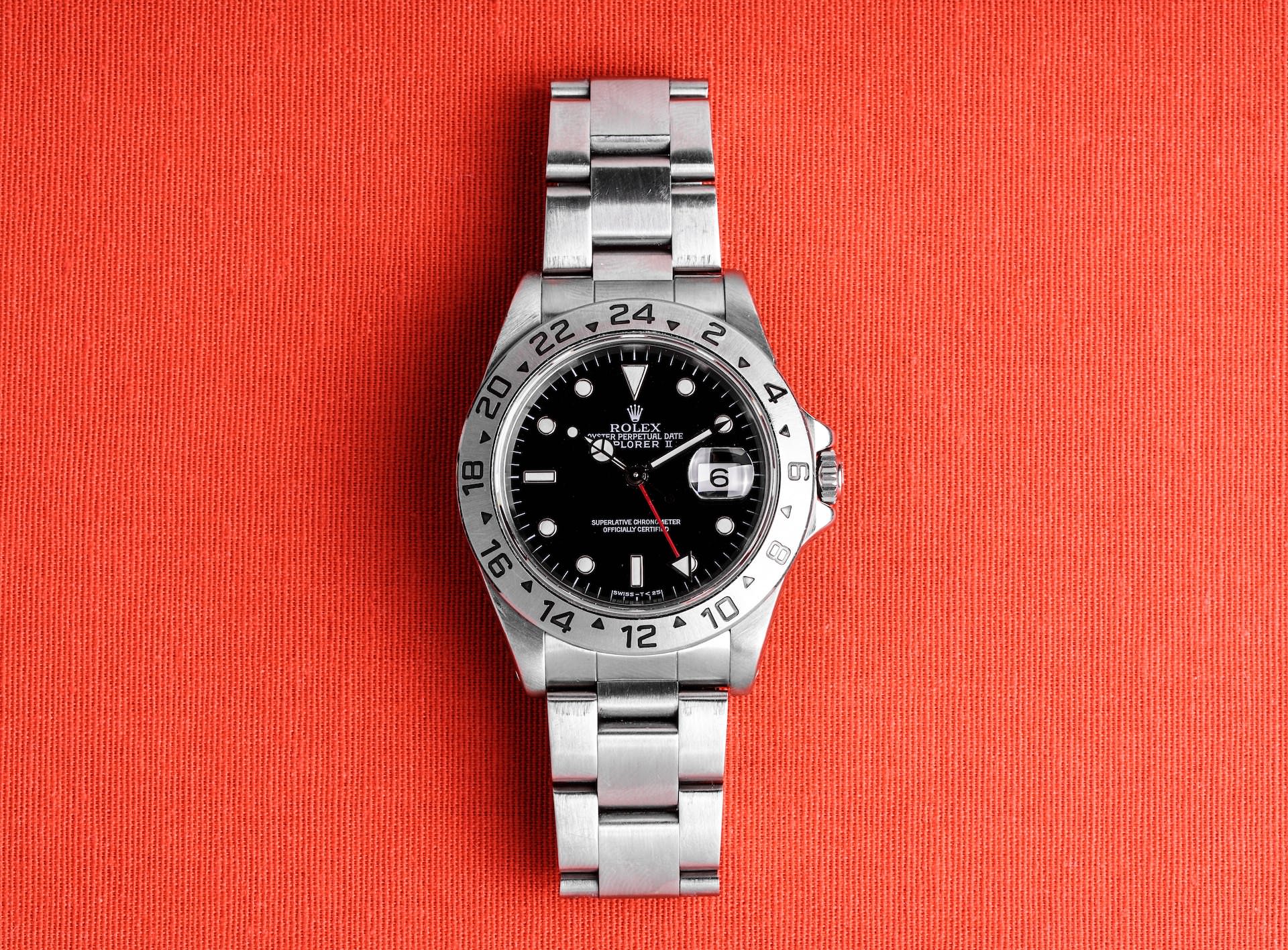 A mainstay in the brand’s catalog for some 22 years, Rolex’s Explorer II ref. 16570 is the most refined and rugged version of this product lineage. It stuck around for so long because when version 3.0 is so good there is not much of a reason to put time into designing and introducing version 4.0.

The ref. 16570 is a modern and reliable tool watch that Rolex does not produce anymore and almost refuses to produce. Just as with the version before it, the case is a comfortable 40mm, lacking unnecessary flash or bulk that the brand has added to their watches ever since this model left the catalog in 2011.

“Despite being a GMT-equipped Rolex cased inside a 40 mm Oyster, the Ref. 16570 Explorer II is still considerably more affordable in comparison to other similar sports references of the same vintage. The pricing of Submariners and GMT Masters in clean shape will definitely support this. For this reason, the Ref. 16570 represents one of the ultimate values in watch collecting, especially considering the reference’s unique, defining traits.”

Couldn’t have said it any better myself.