Everything to love about the Speedmaster MKII

Should you set aside the Speedmaster’s famed association with NASA and the Apollo 11 Moon mission, Omega’s iconic timepiece would still stand out as one of the most compelling chronographs of all time.

That’s simply the power of great design, effective marketing, and a continued commitment to pushing the horological envelope. Though we here at Craft & Tailored are fervent fans of the Speedmaster’s more conventional forms, we enjoy wearing and celebrating the often overlooked Mark series models which followed the legendary Moonwatch. In an attempt to shed light on all this series has to offer, we now explore the one that started it all — the Mark II.

To wholly understand the Mark II’s significance, one must backtrack two years prior to its introduction. In 1967, with the Speedmaster already having proven itself as NASA’s chronograph of choice, Omega began to think ahead and consider how the watch could be further improved for off-planet use. This forward-thinking consideration was realized in the form of a secretive design program known as the Alaska Project, in which the watchmaker employed their most daring strategies to create a new class of chronograph. 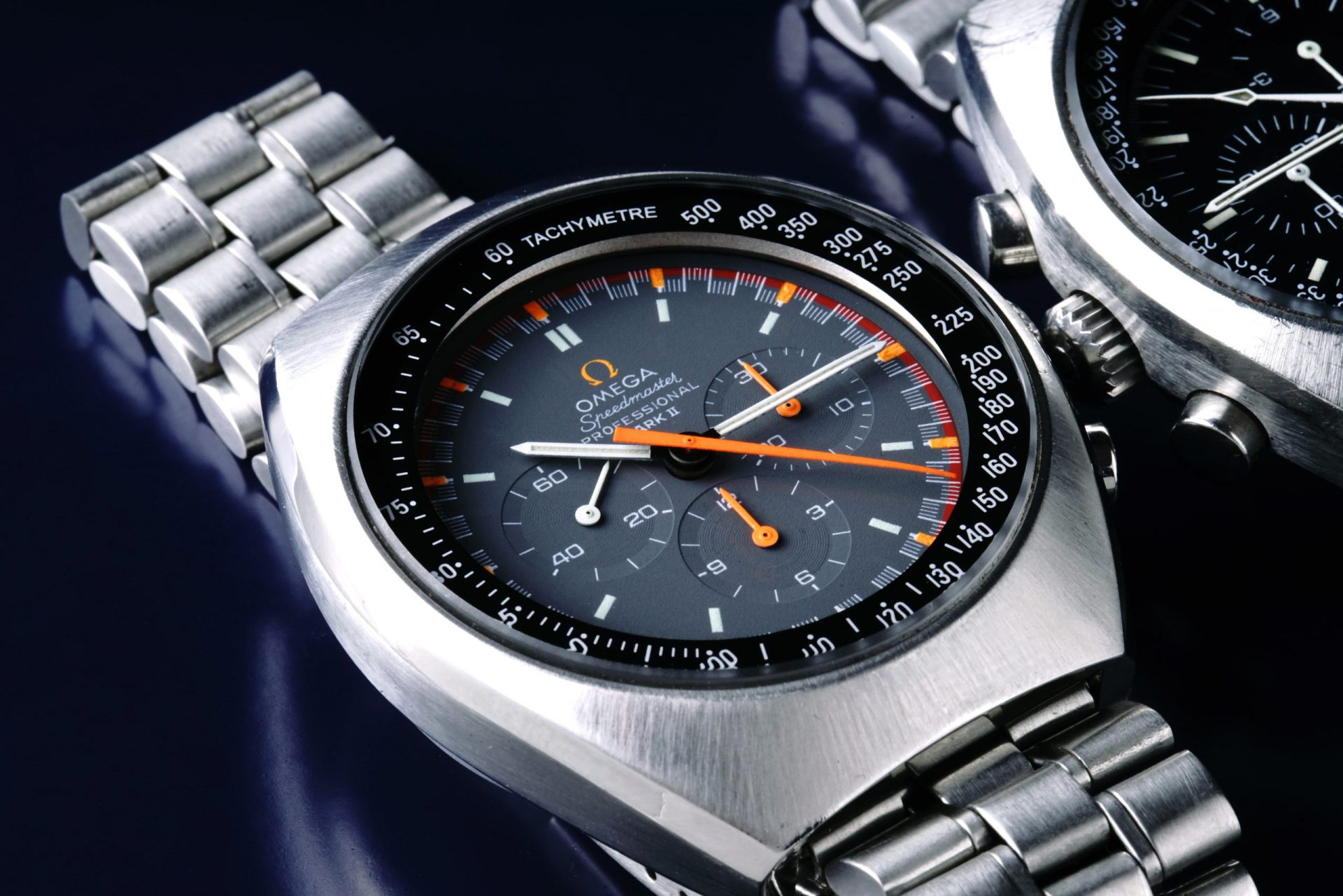 Despite having already met NASA’s demanding standards for space-flight use, Omega wished to supply the space administration with a watch more resistant to extreme temperatures, like those experienced in outer space. This gave life to the Alaska I – the world’s first titanium cased wristwatch — which featured a modified, more resilient Cal. 861 movement, and a sizeable shroud crafted from red anodized aluminum. Although the prototypes did elevate the Speedmaster’s capabilities into uncharted territory, it was deemed unnecessary by NASA in the end, as the Ref 145.012 Speedmaster had already proved itself as more than capable.

Left with a host of new and improved design traits and manufacturing techniques, Omega decided to incorporate select elements of the rare prototype into a more consumer friendly offering known as the Mark II Speedmaster (Ref. 145.014), which was unveiled in 1969. These included the convex-shaped case featuring a lug-less design, complete with a brilliant sunburst finish on its surface. However, the quest to innovate didn’t end there, as in true Omega fashion, the ante was upped once again through the incorporation of a crystal-clad bezel insert. 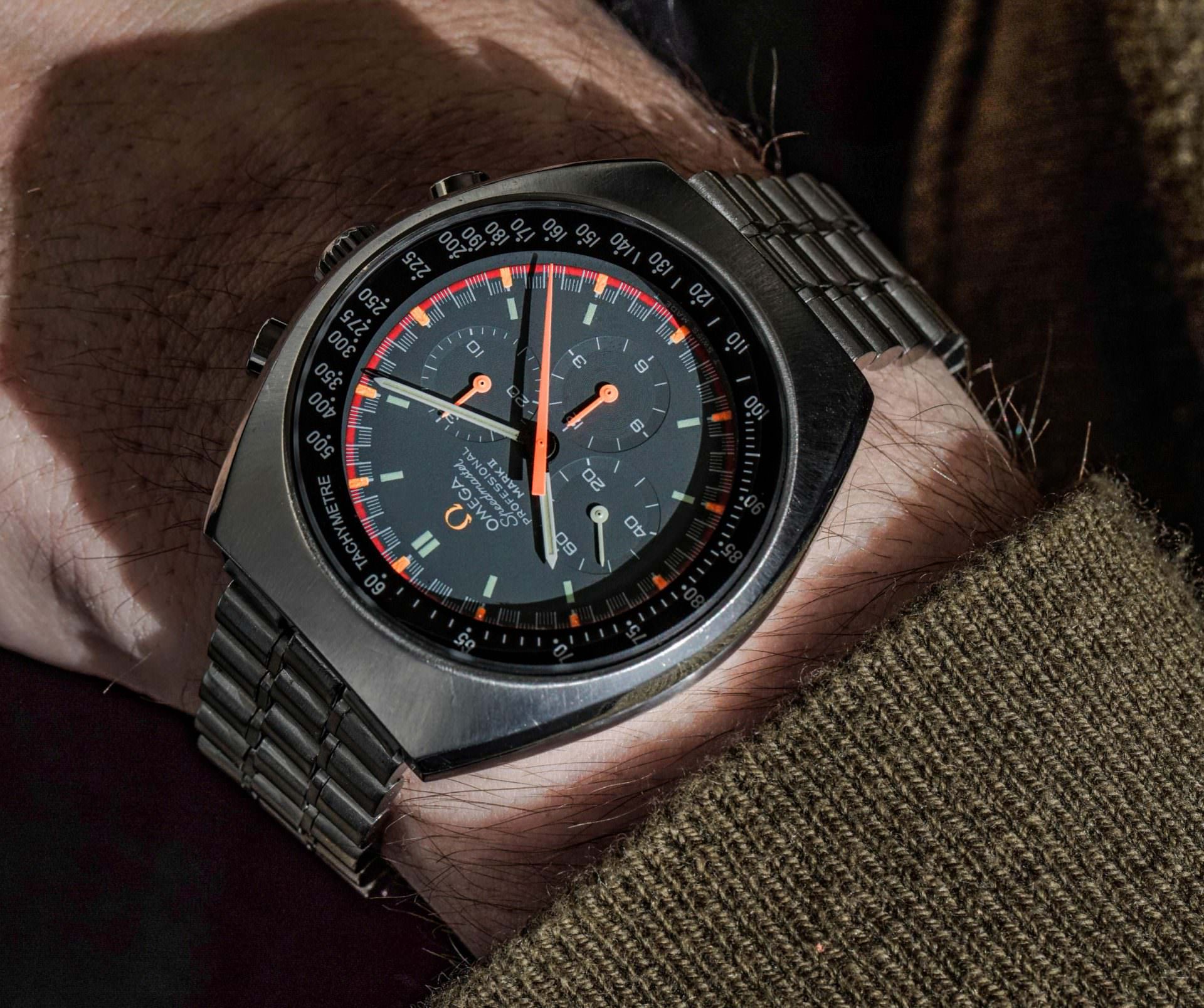 In its more common form, the Ref. 145.014 follows in the footsteps of the standard Speedmaster Professional from a design perspective, thanks to its black dial, ultra-legible white hands, and luminous applications to mark the hours. With that said, Omega still gave the Mark II the same Racing Dial treatment as they had in years past with references like the 145.012. These examples featured dark grey and maroon dials, accented with vibrant orange chronograph hands, tracking elapsed seconds, minutes, and hours.

Savvy collectors of the contemporary watch collecting scene will be quick to tell you that although the Mark II isn’t directly associated with feats as historically heroic as that of the conventional Speedmaster Professional, it’s representative of Omega’s never-ending quest for horological greatness. Whether you’re in search of a Speedmaster that deviates from the norm, or a simply killer looking, unmistakably 70s chronograph, we couldn’t think of a better option than the Ref. 145.014 Mark II. Between the story of its inception and improved ergonomics, there’s surely a lot to love.